I read both of these over the weekend – two short little nonfiction books that I’ve decided to mini-review because I don’t have much to say about either of them. 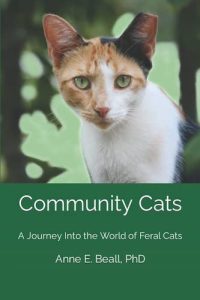 Subtitled: A Journey Into the World of Feral Cats

I thought this was a book about community cats and their behavior, a subject that I’m very interested in. Instead, it turned out to be more a collection of stories from various colony caretakers in Chicago. Beall herself is a colony caretaker, and her personal journey into the world of community cats is what inspired this book. It talks about some of the organizations that help feral cats in that area, but mostly there are short looks at the different ways people become caretakers and how they appreciate their feral cats. There’s some discussion of TNR practices, too, but nothing that I didn’t already know. In the last third of the very short book, there’s a sudden dive into statistics that read like an appendix or supplemental information, rather than being part of the book. The whole thing was rather disorganized and meandering. I know that Beall and the other workers, caretakers, and advocates she discusses are all wonderful people who have done such great work for cats. I appreciate all of them so much. But as a book, I didn’t get much out of this, unfortunately. I couldn’t tell you if that’s because I already knew the stuff Beall discussed, since I do know a lot about feral cats, or if it was a flaw of the book. I’ll just say that I think there are better resources out there if you want to learn about community cats. 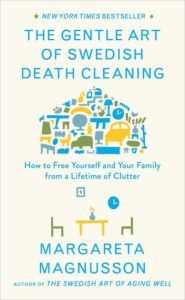 Subtitled: How to Free Yourself and Your Family from a Lifetime of Clutter
Read by: Juliet Stevenson

The idea behind death cleaning is to rid yourself of possessions as your life advances, in order to make things easier on whoever must deal with your stuff after your death. This can be done by giving things away, organizing them, marking them for specific places to go after you die, etc. In a lot of ways – right down to beginning your cleaning with clothes – this reminded me a lot of Marie Kondo’s The Life-Changing Magic of Tidying Up, except more nostalgic and less organized. I did appreciate the nod to personal history and its importance, which made a nice change from Kondo’s “chuck everything” attitude. On the other hand, the book was filled with casual sexism (invite men over to go through your husband’s tools, they love that!) and elder-snobbery (can young people even use a pen these days? why does no one write thank you letters anymore? back in my day…). In the end, I didn’t feel like I learned anything of much use, mostly because what I could have learned, I’d already done so from Kondo (and subsequent regrets of tidying too hard in the wake of Kondo).