The Life-Changing Magic of Tidying Up, by Marie Kondo 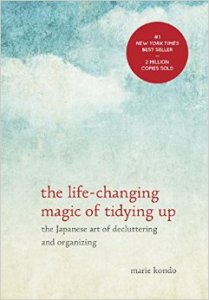 Subtitled: The Japanese Art of Decluttering and Organizing

So…basically this is a kind of self-help course in decluttering and organizing, as the subtitle suggests. It’s been traveling around the blogosphere for a time now, and I first heard about it from Gricel. This is not the sort of book I should have been in the least bit interested in. I don’t usually read self-help or get much from it when I do, and I’m a fairly organized and efficient person to boot. However, the things I’ve read from other bloggers intrigued me, and so I spent half an hour in Barnes & Nobles one evening, previewing it. After half an hour, I did something I almost never do. I bought the book despite not having read (most of) it yet.

Things I was told about this book: that there were some eye-rolling parts; that there were great tips about putting both your stuff and your life in order; that it was useful even for people who are naturally tidy and/or organized. My thoughts on these three after finishing? Sure, I can see what was called eye-rolling, but nothing made me personally roll my eyes, and in fact, I liked those parts! There were definitely great tips for both stuff and life, even for naturally tidy/organized people like myself. In other words, the book confirmed all the good things I’d heard and also contradicted the bad things. Awesome.

Let me put it this way. I’m an organized, efficient person who already does not like to collect superfluous things. I don’t generally like/enjoy self-help or pseudo-spiritual books. Actually, I don’t often like a whole lot of nonfiction in general. This book? Not only was I unable to put it down, but I wanted to read it a second time right away. I’ve never multi-read a nonfiction book before! Not only did I start seeing myself and my belongings in a whole different way, but I began to explore my personal spirituality more than I have in recent years. I’m also trying to get everyone in my family to read this book. I want to start using the KonMari technique immediately, but I’m forcing myself to wait until we’ve fully moved into the new house and the boys start school in August. In a word, this book was transformative – and that’s before I actually begin the work of tidying! I can only guess how much more powerful it will be once I begin to use what I’ve learned.

I am really looking forward to organizing my space. I love organizing, always have, and I can’t wait to start applying this new method to my personal space. Wish I could do the whole house, but with a husband and three pre-teen/teenage boys, that’s simply not going to work out. Now if I could get them all to read this book…

17 Responses to The Life-Changing Magic of Tidying Up, by Marie Kondo