The Unit, by Ninni Holmqvist 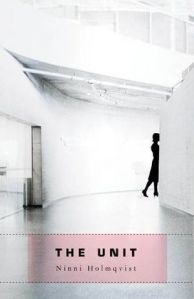 Imagine a world where economic productivity comes first, a world perhaps not so different from our own, if you really think about it. In this world, people are considered necessary to society if they marry, have children (future workers), and/or have productive, useful jobs (teachers, doctors, engineers). What happens, then, to those people who never manage to find partners, who don’t have children, who work in “unnecessary” jobs (writers, artists, etc)? In this world, they are considered “dispensable.”

Dispensable men and women are taken to a facility to live after they reach their sixtieth and fiftieth birthdays, respectably. These facilities are designed to make life as easy as possible for those living there. The dispensables are given their own apartment, and they never have to worry about money again. They can eat what they want, acquire what they’d like, do what they please. The facility has many options for using up time – theatres, swimming pools, gardens, and more. In many ways, it creates a very cushy retirement, made even better by the community of other dispensables living there to offer built-in friendship and support.

But as with every dystopia, there is a darker side. Unlike most dystopias, though, this dark side is not hidden or lied about by the government. Everyone knows what happens to dispensables. They go away, disappear from society, to live cushy lives but also to take part in scientific experimentation and to donate organs to indispensable individuals. Eventually, after a few years in the facility, they will donate their major organs, and die.

Normally I would not spend so much time talking about the world in any particular dystopia, especially without saying a word about the plot, but the world Holmqvist creates really brings up a lot of good thinking and discussion points. So many dystopias that I’ve read in recent years rely on one of two things: either the government forces people to do what it wants, or the government lies and tricks people into believing false information. A dystopia like The Unit, where the government is completely open and dispensables have a certain amount of choice about their status in society, is unusual. It creates a different moral balance, and things aren’t quite so clear-cut. Can the government or economic principles of this society really be called cruel or evil? What portion of responsibility do people have as individuals in their own future’s fate?

The main character of this book is Dorrit, a fifty-year-old writer who enters the facility at the beginning of the book. In her life, she made many choices that brought her here. She got pregnant as a teenager but had an abortion. She avoids relationships until she is almost fifty. She shuns company and society. She chooses to make her living solely as a writer, rather than to work a productive job and write in the evenings. Even without the promise of going into a facility, she prefers solitude and poverty to a more “necessary” way of life. She makes these decisions conscious of what is coming for her.

Then there’s her time in the facility itself. For the first time in her life, she is among people just like her. Dispensable individuals tend to have very similar habits and personalities. They are all people who have chosen to avoid relationships and economically sound employment. They have often chosen solitude and poverty over other things in their lives. Now, for the first time, they have all come together in a place where they can do and have whatever they want, and where they all have each other to lean on for support. Many of them find their first real relationships in the facility – their first true and long-lasting friendships. There’s a scene near the beginning of the book where Dorrit’s friend Elsa, in pain and fear of the future, breaks down crying in a room full of strangers. Reading about what happened brought tears to my eyes:

And when Elsa was finally unable to control the sobs she had suppressed until now, when her cries became louder and more piercing and persistent, first one of the diners got up, then another, and a few more, and the hostess hurried over to the buffet table and put down the dish so that her hands were free. The next moment a crowd of people surrounded Elsa in a semicircle, some sitting on chairs they had dragged along with them, others standing. Those who could reach were touching her. With steady hands they held her shoulders, or stroked her arms, her back or the nape of her neck. As if they were holding her together.

You know what my first thought was? “I wish I lived in a place like this.” Even with my knowledge that living there eventually means experiments and donations and death, that was my thought. Because in this facility, some things are dark and ugly, but some are beautiful and amazing and wonderful, too. The question becomes, is the good enough to outweigh the bad, or is it the reverse?

This was an extraordinarily powerful book, particularly because the answers aren’t completely clear cut. It makes you think. Dorrit goes through some incredible things in her time in the facility, and makes a decision near the end that I know really bothers some people. It didn’t bother me. I think I would have personally made the same decision. I think Dorrit’s life is better off making the decision she made. I think the book is far more powerful the way it ends. The Unit is probably the best book I’ve read all year and I’m so thankful to Jill for urging me to read it, especially in a time when I’m burned out on dystopias in general. This one was worth it, and so different from the norm. It’s much more…grown up, I suppose. Not so black and white. It’s absolutely wonderful.

Agender empty-nester filling my time with cats, books, fitness, and photography. She/they.
View all posts by Amanda →
This entry was posted in 2011, Adult, Prose and tagged favorite, memorable, speculative, translation. Bookmark the permalink.

2 Responses to The Unit, by Ninni Holmqvist