Jude the Obscure, by Thomas Hardy 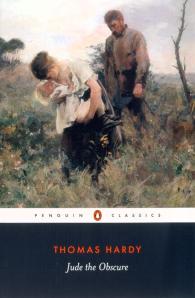 Jude the Obscure was Thomas Hardy’s last novel. It was so controversial and caused such an outrage in the Victorian reading public that he decided never to write another novel. This is my third book read by Hardy, and I can definitely see why it would have been considered controversial! First, though, let me explain a little more about my experience reading Jude, because it was a very difficult book to get through and I almost gave up on it.

The first book I read by Hardy was Tess of the D’Urbervilles, almost five years ago. It was extremely slow to start, with the first 125 pages consisting of almost entirely pastoral descriptions. The last 250 pages read twice as fast as the first 125. That unevenness and the pastoral qualities kept me from trying Hardy for years, even though I ultimately really enjoyed Tess. Then last August I listened to The Return of the Native, which was far more evenly paced and remains my favorite Hardy novel. I’ve liked Hardy much more since Native, and have been eager to read more, so I chose Jude to be my third novel.

I started it in early March, but got bored quickly and put it aside for awhile, to pick it up again in the past few weeks. Slow, slow, slow. And dull. Oh gosh this book started off so boring. It wasn’t just pastoral description. It was the repetitive mundane lives of two or three characters for pages upon endless pages. My copy of the book is just over 400 pages, and I nearly gave up as I reached page 200. That’s a good attempt, right? But something kept me pressing on, probably my love for Native. The book hadn’t been terribly controversial yet, so I also knew that was coming. I took a couple of quick breaks from the book so that I wouldn’t get so bored that I quit, and eventually made it to page 275. A new character is introduced about then, and his sudden appearance changes the book. It was like Hardy suddenly found his stride. Those last 125 pages were AMAZING. Not just good, but absolutely fantastic.

I can see exactly why this book ended Hardy’s career. He doesn’t just have a couple living together like they’re married when they’re not. He violently attacks religion, law, and Victorian social customs. He makes it quite clear that the people who are the most moral are the ones that turn their backs on custom and religious edicts, and that religion and custom turn their backs on the people who are most moral. He shows that when people live by the church’s rule or go back to the church, they destroy themselves and the people around them. I had no idea, before reading this book, how vehement Hardy could be! This book punched me in the gut. The climax scene (with the children, if anyone else has read this) was the most powerful and horrifying thing I’ve read in a really, really long time. I already know this book will stay with me forever. It was definitely very worth sticking with, even if the first 275 pages sucked.

I am ever more impressed with Hardy, and am happy I have several more of his books on my shelves to read. I hope the rest will be more even than this one, I admit, but I won’t be giving any of them up quickly if they aren’t. I highly recommend Jude the Obscure, though definitely with the warning that it might be good to skim the first 250 or so pages if they aren’t holding your attention.