The Monk, by Matthew Gregory Lewis 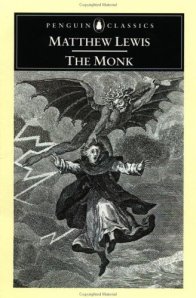 I hardly know what to say about this book, it was such a trip. It was like a 1700s gothic Harlequin romance adventure thriller allegory! Every gothic element you can think of was in the book, excepting the whole vampire/zombie/werewolf stuff which didn’t get popular until later in literary history. But seriously, everything else: evil clergymen, gypsies, fortune tellers, ghosts, demons, sorcerers, cross-dressing monks, bands of robbers, murderers, The Wandering Jew, and the Devil himself; as well as rape, murder, incest, hallucinations, visions of the world beyond, torture chambers, and more. Seriously, take every single gothic element you can think of and throw them into the mix that is The Monk. And yet, it all comes together! It doesn’t feel like a disjointed narrative at all.

There are a couple different plotlines that flow through The Monk. The first is the story of Antonia and her mother Elvira. Elvira married above her, and her husband’s father rejected her, so after her husband died, she and Antonia were left with nothing. As you can imagine, Antonia is incredibly beautiful and innocent.

Then there’s Lorenzo and his sister Agnes, who disobeyed her family by having a brief affair with another nobleman (whose story probably consists of about a third of the book, and who had so many different names that I actually can’t remember any of them, whoops!), and who is now in the hands of unforgiving nuns. Lorenzo is in love with Antonia, and at the same time, trying to save his sister.

Lastly, and most importantly, there’s the Monk himself: Ambrosio, known for his piety and severity, is of course going to have to fall from grace. The Monk is subtitled “a romance,” and while there are quite a few romances going on in this book, I would hazard a guess that the primary romance is between Ambrosio and The Devil, as Ambrosio comes to slowly embrace all the carnal desires he has repressed from birth to his current 30 years. This isn’t a spoiler – it’s pretty obvious from the very beginning that pious, angelic Ambrosio won’t stay that way forever. It’s written all over his dark eyes and curved nose and powerful, dangerous voice! (PS – Yes, I know that’s not what the “a romance” is actually talking about. I’m being facetious here. Go with it.)

This book is melodrama from page one, the very epitome of 1700s gothic sensationalism. I can see exactly why this would have been scandalous, and at the same time, gobbled up by readers. In a time where most of the literature I’ve read has been dull and prim and proper, it was nice to read what the masses read and not just the religious upper class! And unlike The Mysteries of Udolpho, which I tried to read earlier this year, there wasn’t a glut of description or any lull in action the entire book. It was go-go-go the whole time.

I loved it! I laughed a lot (even when it wasn’t technically supposed to be funny) and there were times when I absolutely could not put the book down. My only complaint was that sometimes the story within a story within a story format got tiresome, and the names of the Spanish noblemen were very confusing, mostly because they each had like twenty different names (hence me not even remembering one of the main character’s names). It was like trying to read a Russian novel. But otherwise, I enjoyed every bit of the melodrama, symbolism, allegory, and pure hysteria that was in The Monk. Plus, I just found out they’re making a movie of this one!! I can’t wait!

Before I end this, I must give a shout-out to Erika for recommending this book to me. I think this was the first review of yours I ever read, back in RIP season last year, and I knew immediately I had to read it for RIP this time! This book was so much fun. I loved it!! So thank you! I’d never even heard of this book before your review!

5 Responses to The Monk, by Matthew Gregory Lewis