When I was a preteen, on a day when I felt sluggish and tired, my dad gave me a piece of advice that I promptly filed away under the “whatever, dad” label. He told me that if he didn’t warm up properly before he practiced (playing trumpet) each day, he felt terrible. Not only would his practice be heavy, clunky, and clumsy, but the rest of his day would be as well. As I had been a competitive swimmer for nearly a year at that point in my life, he was trying to make a parallel to my swim practice. I didn’t see the value or relevance of what he said, and promptly ignored it.

As an adult who does a LOT of exercise, I still rarely make use of any kind of warmup. Sure, the yoga videos I follow have warmups built in, and before a 5K, I’ll stretch and jog in place a little and try to make sure my muscles aren’t cold before the start, but I don’t want to do too much and tire myself out beforehand. Otherwise, though, I’ve never seen much of a use for it, especially when it comes to strength-training. This probably sounds a bit stupid, especially coming from someone who does so much exercise (and has done so for nearly 30 years), but there’s a reason for it. It starts with The New Rules of Lifting for Women, which I read in late summer of 2012.

TNRoLfW laid out a seven-stage plan that lasted about six months, and in early September that year, I began to follow it with the intention of finishing around my 34th birthday in March. I didn’t make it through stage 1. Partly, that was the lack of proper equipment. It’s hard to squat heavier and heavier weights when you don’t have a squat rack and you have to start by getting the heavy bar from ground to over your shoulders. (At one point, I strained a muscle in my forearm and had to take time off!) Another big factor was the time. Even though the workout itself wasn’t too long, the workout + warmup + workout-warmup was over an hour! All of that left me feeling sore, exhausted, tired, and dreading the exercises. And the warmup was the absolute worst. Frankly, I didn’t see the point of doing bodyweight squats as a pre-warmup for low-weight squats as a workout-warmup for heavy-weight squats. That’s too many gd squats!!

(2013, before another ST program attempt)

Since giving up/failing the NRoLfW plan, I’ve attempted about half a dozen other strength training plans of varying levels and complexities. In the beginning, I always followed instructions and did the accompanying warmup. Inevitably, said warmup would tack on an extra 20-30 mins to the session and I’d be physical exhausted even before the real workout began. Needless to say, I never made it very far. So I started skipping the warmups instead. Now, the workouts didn’t take as long, but the inevitable fatigue, soreness, and days-long regret continued to linger. The last time I attempted this was back in May, with a very VERY beginner level workout. I think I made it through one of six weeks before I decided that I’m just not meant to do heavy ST and quit. 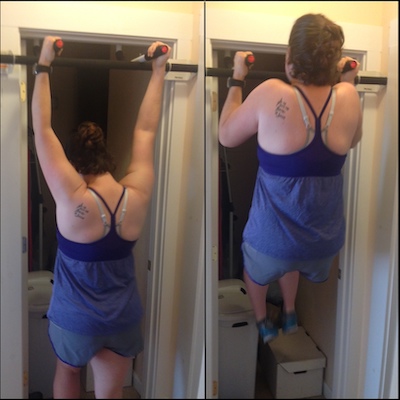 So that’s where I was in late June when I joined this GGS personal coaching plan. My biggest reservations about the program was the strength training portion. I know that muscle-building resistance workouts are crucial to build metabolism and keep your body healthy – I just prefer to do that as part of my yoga practice! So I chose the easiest program I could, for the easiest beginner level, with only two workouts per week. Unfortunately, those workouts came with a “warmup.” You know, a warmup that consists of mountain climbers, side planks, and walking lunges in addition to another seven exercises and/or stretches. The warmup looked harder than the actual workout! I knew I would never make it, and I dreaded having to try.

There is a lot of reading material that comes with this program, and part of it discussed the purpose of warming up before strength training. Supposedly, if you warm up, it prevents delayed onset muscle soreness (DOMS). Obviously, this had never been the case for me! I got the same amount of DOMS with or without a warmup. In my mind, avoiding that excruciating soreness was out of the question. But I thought, perhaps I could warm up using light yoga instead of the battery of bodyweight ST. After all, I enjoy yoga, prefer it to regular ST, didn’t want to remove it from my regular exercise routine to accommodate the new ST, and have experienced firsthand how much easier walks are if I’m already warmed up via yoga. (You’d think the expression “warmed up” would have clued me in earlier, but no matter.) I asked my coaches if I could sub the yoga in for the dynamic warmup, and they agreed.

Oh. Wow. I had no idea the magical effect a proper warmup can have. All those bodyweight ST warmups? They were too much for me, even back in 2014 at the height of fitness and strength. (T-pushups? No prob! Swiss ball inverted crunches? Can’t even feel them. Stupid frickin’ inchworm warmup? Oh god I’m gonna die…) It was like doing two to three ST workouts in a row back in the days of NRoLfW. I needed a warmup for the warmup for the program-warmup for the program… But using yoga to stretch and get my muscles loosened and ready to go? That has been incredible. I’ve been doing these ST workouts for several weeks now, and I’ve had absolutely no DOMS whatsoever. You know how you sometimes squat or lunge down – even in real life, not exercising – and you feel a muscle pull a bit and you know you’re going to be in pain and unable to sit easily for days? That moment of, “Oh crap, I pushed myself too far.” Even when I’ve felt that, which is most workouts because I have a tendency to push hard, I still haven’t gotten any residual soreness. I’ve spent the last eight years avoiding warmups because they didn’t help, and turned out all along that I was just doing the wrong kind!!

I’ve been doing light yoga before my runs these last few weeks, too, and it has made a substantial difference in how much I can run, and how much burning I do/don’t feel in my legs/hips/back while running. It’s nuts. What a discovery! Makes me wish I’d studied this all more carefully, or headed the advice of my dad all those nearly-30-years ago…