The Turn of the Key, by Ruth Ware 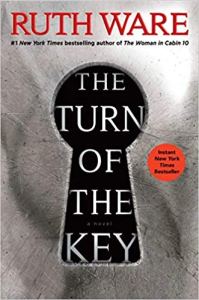 Rowan thinks her new nannying job in a remote part of Scotland is perfect, but she soon learns that things are too good to be true.

I was wary going into this book for a few reasons:

Still, I was determined to read, and so I began. Immediately, I was a bit put off by the fact that this novel is basically meant to be the narrator’s letter to a lawyer. I don’t like novels that are in letters, diary entries, newspaper clippings, text conversations, interviews, etc. And of course, since all but the first and last few pages of this 336-page book make up a single “letter,” mostly told in regular prose but with occasional breaks to plead with the lawyer, it’s not in the least bit believable. However, since I’d learned ahead of time that this was a retelling of a classic, and I already knew this was a frequent technique used in that style of classic, I decided to ignore my annoyance and keep going.

What follows is a fascinating story. I do admit, the jacket description is a bit misleading (the whole “left alone for weeks at a time” when the main story takes place over less than a week. But mostly, it was a fun mystery to unravel. Then you get to the end, the part everyone complains about. My thoughts, no spoilers:

Honestly, I don’t remember The Turn of the Screw well enough to know if this bookwas a good adaptation. My vague recollections tell me it didn’t read as a whole story, just as pieces that don’t go anywhere or add up to anything. And either way, The Turn of the Key was on balance a much better book, in my opinion. It was flawed, but definitely memorable and spooky and a fun read.

Agender empty-nester filling my time with cats, books, fitness, and photography. She/they.
View all posts by Amanda →
This entry was posted in 2019, Adult, Prose and tagged revisiting, RIP-worthy. Bookmark the permalink.

4 Responses to The Turn of the Key, by Ruth Ware