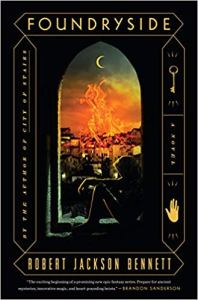 Sancia is a thief-by-necessity in a world where class difference is sharply divided. She avoids those who have power, prestige, and wealth, but on a dangerous job which should pay a huge sum of money, she gets tangled up with the people she’d rather avoid. All of a sudden, Sancia has to team up with black market scientists, some rich elite, a self-appointed officer of law, and a sentient key in order to stop a couple ambitious people from becoming gods and destroying the world.

I first heard about this book from the author when I met him early in the year. He described his Divine Cities trilogy (which I read last year) as fantasy novels masking as thrillers, and he described this one as the opposite, a thriller masking as a fantasy. The description is pretty accurate, though I’d say it’s more like a heist novel masking as fantasy. I’m more a fan of fantasy than I am of heists or thrillers, so I definitely appreciated the Divine Cities trilogy more – however, this was still a very, very good book.

The book explores a question that I think is essential in fantasy world-building. All magic systems must have limits, hopefully limits that are as great as if not greater than the benefits of magic. There should be a cost to magic. Otherwise you just end up with the “anyone can do anything they want” situation (polyjuice potion, anyone?). But Foundryside asks: What happens if someone discovers a way to make magic limitless? What if someone figures out a way to give themselves infinite power? There’s no question that this is a Bad Idea, of course, but in a world where current technology and magic approaches that infinite point, how will people resist and/or react to the possibility of achieving that godlike state?

There’s also a lot of discussion about slavery, and how society becomes dependent on slave labor, and how people who have once been treated as objects still view themselves as such even after escaping slavery. There’s a lot of psychological untangling, in a world where reality itself can be bent to believe it’s different than it truly is. When the expert magic-scientists can convince objects that their nature is contrary to what it is in reality – example: a cross-bolt, when shot, believes that it is falling downward and has been falling downward for miles, so that its velocity and trajectory are devastating to the intended target – how can people cope with the psychological effects? If society treats objects as manipulatable reality, how would they view and treat the people around them, especially those of lower class?

Then there’s the way Bennett handles characters. None of them are entirely likable or good. Some of them are downright despicable in personality but good in heart. All have histories that don’t speak well for them. None of them are straightforward or simple. Same for their relationships with each other. There’s a huge class divide in the ragtag group mentioned above. Some people are outsiders because they work in the magic field in technology no one really understands (think “mad scientists”). Some are outsiders because their aims are different from the rest of society. Some are outsiders because they possess traits that are rare enough in this world that they must remain hidden. I loved seeing how these people eventually comes to terms with each other and become, if not friends, then at least partners who respect each other. Again, it’s not easy or simple or straightforward, but it’s the making of a connection that I imagine will continue in the next volume of this series.

The heist portions were my least favorite parts of the novel. I get bored during heists. It’s just not my thing. But the other stuff, both philosophy and the excellent characterization, was enough to outweigh that. My only other complaint was that there were way too many short exposition/info-dumps in the first few chapters. There’s a lot of world-building in this novel, I get that, but there didn’t seem to be a good integration of that world-building for a short time. Thankfully, though, that improved pretty quickly. And other than that, this was a delightful novel that struck the perfect balance between story, depth, and character exploration. I can’t wait to read the next one!