Oy. This week has been a roller coaster. I’m not really back to the blog yet, but I needed a place to update everything that has happened, so here goes (warning – long):

9/1: Sewer pipe backed up, but we caught it before there was too much damage. Jason took apart the guest toilet, thinking that was the problem. It wasn’t. We called out a plumber. It was an emergency Saturday call so he didn’t have a camera, but suspected roots in the line. He did some work to clear out debris caught on the roots, and said to go light on sewer usage until more work could be done.

9/2: Pipe overflowed again, and this time we didn’t catch it in time. Brand new living/dining floor destroyed. We ripped off the floor and started a new insurance claim. Plumber came out with a camera and discovered it wasn’t tree roots in the line but a giant calcium deposit. It was also very near where we had already dug, so he told us how to remove it ourselves (Jason can do basic plumbing work), in order to save us money. Jason dug out the pipe and the calcium deposits, but the line still wouldn’t drain. Plumbers came back out with a larger scope and discovered that the slope of our yard had bent the line of the pipe. They were going to need to get a city permit to dig eight feet into the xeriscaped yard, which could take awhile (both permit and digging). In the meantime, we had to go live in a hotel, and we thought we were going to have to cancel our vacation (we leave on the 13th). But the plumbers instead requested an emergency permit and started to look for someone to operate a backhoe on Labor Day. 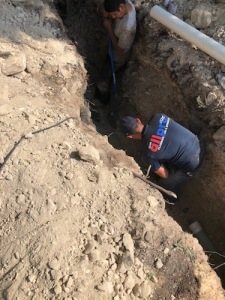 9/3: We transplanted all the plants in the half of the yard that was being dug up, and moved all the big rocks we needed for our rock wall. Backhoe arrived and began digging. Digging took most of the day because they had to jackhammer into the bedrock near the end. New pipes laid, but they couldn’t get the backflow valve they needed until the next day, so they left it overnight. In the meantime, we sealed the one section of the concrete floor where mold had sprung up again from the last claim, bought new flooring, and laid the first couple lines of floor.

9/4: Overnight, it rained for the first time since 7/4, and it rained so much that the newly-laid pipe floated up and then was slammed back onto the bedrock by a rockfall in the trench. New line destroyed.

Plumbers had to wait for it to dry out enough to re-lay the pipes. Inside, Jason laid a big chunk of the rest of the floor while I took loads of dirty dishes to the hotel to wash (heh). We also got word that the insurance approved work on the inside, but won’t cover the outside work or the damage to the landscaping. Meanwhile, we got a call from Jason’s mom, who was supposed to come watch the kids while we were on vacation. She’s very sick and can’t come after all. Suddenly we were scrambling for someone who could stay at our house for ten days to be there with the boys. Thankfully my friend Nat was able to come through for us, and my mom said she could be a backup with enough warning.

9/5: Plumbers came back out to clear the line and re-lay it, again, this time with the backflow valve. They braced the line with heavy rocks so that the same thing couldn’t happen again. Unfortunately, this is where a new thing went badly wrong. After dropping off the kids at school, Jason’s side airbags malfunctioned and went off as he was turning a corner. He ran off the road, not hitting anyone or anything thank god. One of his front tires blew but we’re not sure if that was before or after the airbags went off. Other than some cuts and bruises to one arm, he was safe and unhurt. But suddenly one of our cars was totaled and we were down to one car. Sigh. While I canceled doctor’s appointments and other things we were supposed to do that day, he got the insurance to send a tow truck and such, and we met back at the house. We finished the last few planks of flooring this day, but most of the day was scrambling around dealing with car stuff.

9/6: Plumbers verified the line was still safe after more rain, and called for a city inspector. Inspector came out that afternoon and said we were good to bury the line, but it’s still too wet for them to bury it safely, so they made sure to weigh the line down again so it doesn’t break (we’re in for about two weeks of solid rain). Jason was still trying to work-from-home all these days, and he had to balance that with rental car and insurance stuff. I drove him around until he had the rental, and I otherwise spent the day cleaning our house, moving furniture, catching up on laundry, gathering receipts for the new insurance claims, etc. We also checked out of the hotel.

9/7 & 9/8: We acquired a new car for Jason. Boo for having two car payments again, but at least we’re no longer in a rental. The trench was still too wet to bury the line, and we’re basically going to have to wait until it dries out, which might not be until after our vacation. (Again, it’s pouring out right now, and we’re expecting another two weeks of this.) We’re working on getting our house back together again – new toilet, new vanity, floor trim and thresholds in the living/dining rooms, putting the shelves/books/decor back up, etc. Insurance inspector is scheduled to come Wednesday to look at the damage, but since we’re leaving Thursday, we pretty much need to have most of the work done before he comes, which doesn’t bode well for us in terms of getting any money back. But we’ll do what we can. And fingers crossed we can still leave on Thursday! We need this vacation so badly!!