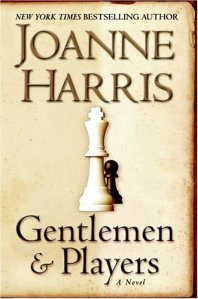 Note: My original review of this literally consisted of a two-sentence reaction. Instead of keeping this post primarily as a placeholder, I’ve written a full review of Gentlemen and Players, and this will be my spoilerific thoughts on first reading. In other words, beware of reading on if you don’t like spoilers!

Here’s the thing about this book. Roy Straitly is our first narrator, a mid-60s crotchety old Latin professor. Our second narrator is unnamed, but revealed to be 1) a new teacher and 2) the child of the former porter for the school. The twist comes when the second narrator is revealed to be female. Most of the book never refers to her gender, and her exploits as a child – posing as a boy at the private school, hanging out with an older student that she falls in love with, etc – all lean toward male. The language is extremely well-crafted. Her father wished to have a son made in his image, but instead has our narrator. That sort of thing. You wouldn’t notice if you weren’t looking carefully. It’s a mystery, of course, so many people are looking carefully, and some people figure it out ahead of time, but I didn’t.

Part of my ignorance, I believe, is because I listened to this book on audio the first time, and the lack of definitive pronouns is easier to gloss over when you’re listening instead of reading. More than this, however, is a mistake I made toward the beginning of the novel. I somehow got the impression that the second narrator was a new teacher named Chris Keane. The narration is meant to make you think in this direction, of course. This is what is implied. But I didn’t think it was implied. I thought the second narrator came straight out and said they were Chris Keane. I thought the mystery was not in figuring out the culprit, but watching the other characters figure out the culprit. That is, by far, my favorite kind of mystery – where the audience is informed and the characters are not. So that’s how I read this book.

So when the child-version of the narrator, known only by her last name, Snyde, begins to fall in love with her student friend, I thought this was a homosexual crush. Then, when Snyde is revealed to be Julia Snyde, I literally thought Julia Snyde had become Chris Keane, and that this was a transgender story. When the modern-day narrator was revealed as Diane Dare, rather than Chris Keane, I was so very confused. It took rereading the book, and seeing that Chris Keane was only implied in the beginning, to make me understand.

And honestly, I don’t mind at all that I read it so wrongly the first time. I think that made the experience of the book so much better. If I’d realized Harris was only implying Keane was the narrator, I would have been looking for alternatives to the mystery. I would have paid more attention to the hints, rather than just going along for the ride. And it’s the ride that made this book wonderful.

1 Response to Gentlemen and Players, by Joanne Harris (audio)