Oy. Well, the land-clearing outside my fence has continued since my last post. The photo collage shows the picture I took a couple days ago vs one I took yesterday. As you can see, they cut the big tree down. I was hoping they’d leave that one up. Not only was it 40-50 feet tall, well-established, healthy, and beautiful, but a whole flock of mourning doves lived there. In fact, all last night, I watched mourning doves fly in and circle, trying to find their former perches. It was just so sad as they got confused and wobbled their way to nearby trees, then took off to circle and search again. Anyway, it’s frustrating and annoying, to see this happening to the trees that didn’t really need felling, but the situation goes beyond that. 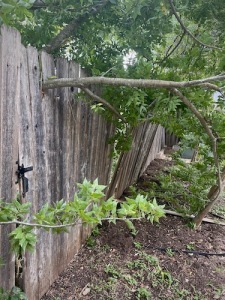 Who in their right mind, when cutting down a tree with a chainsaw, pushes said tree toward a path that will cause property damage? WTF?

So when I heard the chainsaw going outside my house yesterday, I went back to my room to get photos/video, and I’m glad I did, because I witnessed everything that happened. I watched the guy with the chainsaw step up to look around before he pushed the tree. I saw him choose the direction to push, so that the trunk would be parallel with the fence line, rather than out into the field where there’d be no possibility of damage. I took a photo of the big tree the very second it began falling, and by the time I switched my phone to video, the tree had already hit our fence.

Now, our fence wasn’t in the greatest shape to begin with, but it was all upright, with a working gate. We had one plank removed to allow the feral cats to go in and out, but that was deliberate. The tree knocked three planks free completely, ripped out an entire panel, and knocked some posts askew so that the gate will no longer open. Not to mention, a tree branch smashed half a panel away, a bunch of branches were torn off two trees in our yard, and two of our new plumbago bushes got squashed.

I had to go out and get the man’s attention, which then led to me talking to two other men (who treated me alternatively like a – sorry for the use of the word – Karen for asking for their company name, and a stupid little woman who couldn’t possibly understand that my fence wasn’t REALLY damaged and all they had to do was put some nails in). Long story short, it’s an ongoing mess. Thankfully, our outdoor camera caught the entire thing on video, planks blowing out at the smash, branch ripping away part of the wood, etc. As I type this, some guys from the company are out at the fence trying to see if they can get away with cheap repairs instead of replacing the parts that they destroyed. They clearly don’t want to take responsibility and they think that since our fence was in poor condition before the tree fell on it, they shouldn’t have to. Um, no. That’s not how that works. It’s not like we’re asking them to to replace the half of the fence that the tree didn’t fall onto, and that’s the side that was in really bad repair. 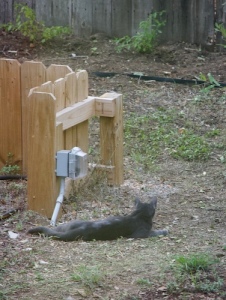 This morning, the doves are still circling and trying to find their tree. I was up super early because the lack of tree-line meant I got a lot more sun around the edges of my curtains from the now-empty sky. Not to mention the much louder noises of traffic that I can now hear from the highway – noises that used to be almost nonexistent. Lord Grey is missing his breakfast because the workers are investigating the fence issue, and last night he actually took refuge in our yard because the woods outside it – his former kingdom – had been destroyed. The whole situation is just so sad and unnecessary.

So why are they doing this? We don’t know, but after talking with multiple workers from the land-clearing agency (who, the boss claimed, didn’t know who hired them, just “some guy named Cody.” Sure, dude…), we’re under the impression that the electrical union, who owns the land, is clearing it to sell because it’s more valuable now that it sits between a neighborhood and an apartment complex. I don’t know where it’ll go from there. But honestly, it’s just another nail in the coffin of “gotta move away from here.”

Writing. Family. Books. Crochet. Fitness. Fashion. Fun. Not necessarily in that order. Note: agender (she/her).
View all posts by Amanda →
This entry was posted in Personal and tagged house. Bookmark the permalink.