Sunday Coffee – an everything slump 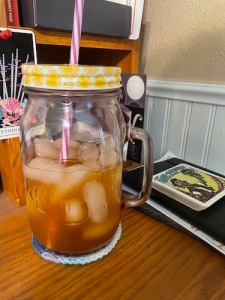 This week, I picked up a book that I’d had out from the library for a couple weeks: One Great Lie by Deb Caletti. I’d put off opening it, even though I normally love Caletti’s books. Maybe it wasn’t the right time. Her books are slow-burners, and maybe I needed something else. I read through a few pages, finally, and decided to return it to the library for now, without removing it from my TBR.

Then I picked up another book I’d had out for the same amount of time: Any Way the Wind Blows by Rainbow Rowell. Very different book – fantasy, humorous, fast-paced, and part of a series I already loved. Again, I decided to return it to the library after a few days, saving it on my TBR for another time. I just had no interest right now.

So yeah, it feels like a reading slump, only…it’s kinda not. Because I’m not really doing anything. I’m not exercising. I have no interest in writing in my daily journal (last written in on the 8th), which I’ve literally been keeping for a decade. I’m withdrawing from planned events. Not responding to emails. Not keeping up with my planner – last used on the 6th – or day-to-day stuff. I’m just…depressed, I guess. Not in the sad way of depression. Just in the “all I want to do is mindlessly stare at the TV or my phone and do nothing and then sleep” kind of depression. Everything feels pointless.

Ever since adolescence, I went through cycles of depression that would hit three months of the year: mid-January, April, and August. In adulthood, the January episode has trailed off. April and August remained miserable, depressed months, and it was very clear what the physical trigger was for these episodes. I suffer from a sort of reverse seasonal affective disorder, where I get really depressed throughout the summer. It has roots in the same cause – lack of sunlight – because it’s so hot for months on end that I very rarely go outside. Sunlight through windows isn’t the same. April is when the weather begins to turn hot. August is the hottest month and when we tend to have drought and relentless temps that don’t drop below 80 even at night.

In the last decade, things have changed a little. I went through some severe trauma in May 2014, May 2015, and May 2017. The April episode, while still there to some degree, has basically ceded to a full on PTSD episode in May. August has remained a blah month due to heat, and added some milder traumatic PTSD moments from 2014. However, starting in 2011, I continued to exercise outdoors all summer, so the sunlight portion of the depression wouldn’t be as prominent.

Only this year, it is, because I’ve been basically housebound since early May. I very rarely exercise, very rarely leave the house, and I avoid going outside at all costs. I stare out my window and take lots of lovely photos of butterflies in my garden, but I wouldn’t step onto the grass out there if you paid me. I can barely make myself go onto the deck periodically. It’s so hot, my body hurts, and I’m so tired. So I do nothing. And then the PTSD triggers pop up on top of the lack-of-sun and lack-of-movement, and I fall deeper, and deeper, and deeper.

Laurence starts school tomorrow, in person for the first time since 3/6/20. Ambrose starts school the week after that, and Jason is already going in to work for two days a week. Soon, I’ll have two days a week with about four hours of alone time, which is more than I’ve had in about 1.5 years. That will absolutely and definitely help. So will the nearing of September, and thinking about RIP season, and getting back into exercise again. Also, I really need to cut back on sugar. I’m eating way too much and sugar is a known depression trigger for me. (Not like I’m depressed or feel guilty for eating it; it literally affects my hormones and causes me to feel exhausted, mentally foggy, and unmotivated.)

Hopefully in the next few weeks, I’ll get myself back into a better headspace. It’s been a really hard year for me, one of those years where you get relentlessly ground down slowly but surely. I know a lot of people went through this in 2020, but up until about November/December last year, I actually had a great 2020. Ever since then, though, I’ve just been on a steady decline, and I really want to start climbing (literal and metaphorical) mountains again.

3 Responses to Sunday Coffee – an everything slump