This was the last 5K that I signed up for in 2020 before the plague took over. It was meant to be a non-virtual race in May that I was walking with Jason and several hiking friends. Then the event was moved to July with a virtual option, and later switched to full-on virtual after San Antonio’s caseload began to spike in June. Like I said before, I wasn’t planning on running this 5K, but walking it with friends. However, there was no reason not to run it now, seeing as I’m all solo up here in northern Wisconsin!

About the 5K: Gabriella’s 5K Cupcake Run started a few years back by a family whose daughter was diagnosed with brain cancer. This 5K raises money for brain cancer research. One of my best friends’ mother has had brain cancer four times, so this is a cause dear to my heart. You can read more about Gabriella and her 5K here.

Pic shows the race swag that is waiting for me at home: Shirt, bib, medal, bracelet, glasses, phone-holder, and a homemade sugar cookie that is replacing the traditional cupcake given out at the end of the run. Sadly, I will have to let Jason eat mine in addition to his because I don’t know if I’ll be home before it goes bad. Boo! I bought myself one of those cups of mini-Oreos as a substitute!

About my route: Not long after I first arrived in WI, I mapped out a course to walk/run (not for this event, just generally). I didn’t map the distance, only the course, and it turned out to be 3.2 miles – just over a 5K. It also had a few good-sized hills in it. I did this course both on 7/7 and 7/11. During the first training run, I did 5:00/3:00 run/walk intervals, and finished the 5K in 51:00. In the second, I ran all but 7 mins (split into three breaks), for a total of about 2.8 miles running (but not nonstop). My time was 50:23, my second fastest 5K ever. After these two training runs, I used a google-maps builder to map out an exact 5K, this time on mostly level ground, for the official race. I did a trial run of this route on 7/15. 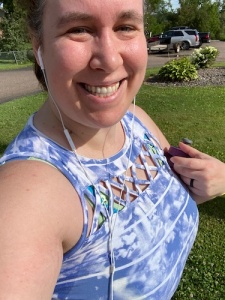 Personal Milestone: When I went out on 7/15 for the trial run, I didn’t plan to run the full 5K. Honestly, I wasn’t sure I was up to that yet. Even on 7/11, when I ran 44 of the 51 mins, the longest nonstop section was 21 mins. I haven’t been able to run longer nonstop times/distances since I finished C25K in May (where I ran 2 miles in 33 mins, a 16:43/mi pace). But I felt really good, and I went out slow and careful, and by the time I was a mile into the run, I decided to try to run the whole thing. AND I DID IT!!! I ran the entire 5K. It may have been super slow – 51:45, a 16:42/mi pace – but I ran the entire thing, and kept my heart rate steady around 162 bpm, and it felt AWESOME! It felt even more awesome when I discovered that I finished the run in the exact same time as my Elf Run 5K. The Elf Run was on Dec 15, exactly seven months prior, and it was the walked/run 5K that made me want to become a runner again. That day led to this one, seven months later, and I was just absolutely thrilled to have accomplished this milestone!

The Cupcake 5K: Technically, I was supposed to sign up with a specific app and run live with everyone else. The app looked sketchy and required an account, so I decided to just do this one on my own. Doesn’t matter where my time slots in with everyone else! The morning dawned mild and super-humid (literally, the weather channel said 100% humidity!). Not my favorite weather to run in, but I got out there. I decided to walk/run this one, pushing the running sections a bit more to try to get a good time. My goal was to beat 50 mins, and in the back of my mind, I was hoping to beat my current 5K PR of 47:54. That second one didn’t happen – humidity is BAD FOR ME – but I did come close, finishing in 48:46, a 15:44/mi pace. It’s my second-fastest 5K now – only my second 5K under 50 mins – and I’m super happy with that time, especially in a virtual setting without all the hoopla of the race environment to get you pumped up! (I love and miss real races!)

Afterwards – and after stretching, showering, more stretching, and more stretching – I ate this amazing breakfast of stuffed French toast with all kinds of fruit, plus a cinnamon bun for good measure. Who needs mini-Oreos, eh? I’ll save those for another time!

This race crosses off the fourth square in my Running Bingo. I had a lot of different options for which square to cross off, and I’ve decided on the “virtual” option. This wasn’t meant to be a run, and it wasn’t meant to be virtual, but that’s what it ended up being, so this seems a good fit. Plus, I’ve realized that I’m not a super huge fan of virtual races, so unless I have a specific Bingo category in mind, I doubt I’ll sign up for another one. This can go ahead and cross it off the list. Here is my updated Bingo sheet: 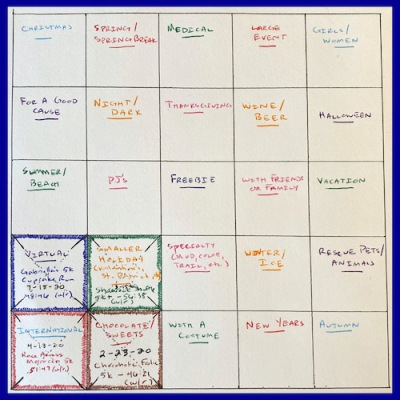 PS – Jason also signed up for this race, and he decided to walk it this morning due to scheduling complications yesterday. I think originally he was planning to run parts, but he wasn’t feeling the best this morning with itchy legs, feet, and hips (a weird condition he gets if he’s not exercising as regularly as he should be). Not to mention it’s ridiculously HOT in San Antonio! He ended up doing most of the 5K without shoes because of the itchiness, despite the heat. Oy! But that’s my Jason – not a fan of shoes no matter the weather. Heh. He sent me this picture afterwards. I think he’s only pretending to be happy. 😀