Though my dad’s side of the family were huge football people, I was never a fan of football growing up. Neither was Jason. When our kids were young, the only football they ever really saw was when we had an annual picnic for the Super Bowl. It was really more about the picnic than the football, heh, and the boys enjoyed this. Then we moved to Boston in 2014, and I was massively homesick. On an old blog post, I wrote:

Since moving up to Boston, I’ve been turning the TV on to football nearly every Sunday. I don’t actually sit there and watch. I’ll often read, or blog, or do something else I need to get done. But I listen, the volume turned down low, and the background of football brings out a certain nostalgia for home that makes me feel less homesick. It makes me feel closer to my family, with them being so far away.

Even though I was using football as a soothing technique, I knew my youngest son, Laurence, would love it. I encouraged him to watch, and sometimes he would. Mostly he didn’t bother, so I didn’t push him. After we moved back to Texas, football went back to being an occasional thing. I’m not sure exactly what flipped the switch, but suddenly Laurence became obsessed sometime in the fall of 2017. He didn’t just watch the games. He began learning about the players and coaches and team stats and all the rest. He bemoaned the lack of football between the last Super Bowl and the draft in April, then he obsessively watched the draft, then moaned about the lack of football until preseason started. This past fall, he began taking his (physical) football down to the park with one or both of his brothers in tow to play (mostly they did a lot of punting). 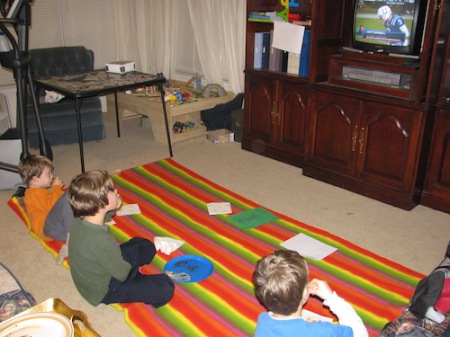 There has been a LOT of football in our house for the last year. And honestly, since football helped me so much in Boston, I look at it fondly now, It’s something I can share with the boys since I don’t do the whole D&D or Magic the Gathering or video game thing with them. I probably watched more hours of football in the last year than the rest of my life combined, haha. We all have our teams – Jason has been cheering for the Browns since 2010 (and hey, surprise, they actually won some games this year!), and Ambrose follows him in that. Morrigan votes for whoever is winning, with special emphasis to Texas teams. Laurence waffled from the Ravens to the Jaguars to eventually the Buccaneers. This last one came from a random Siri pick when he and Jason decided that he needed to finalize his team, haha. Siri also got to pick my team (though I made Jason narrow my list to the half-dozen teams I liked), and she chose the Seahawks for me. Which is kinda what I would have chosen anyway because their uniforms are so frickin’ awesome! My brother says he has to disown me for choosing “the highlighter team” though, ha!

(Technically these are their color rush uniforms. Normally the green is an accent color. But isn’t it amazing??)

None of our teams made it to the Super Bowl, but we’re all cheering for the Rams tonight. I even have a blue-and-gold outfit picked out, haha! We have a couple friends coming over, including a few diehard Patriots fans, so there’s going to be a rumble! And a great picnic, because that’s what the Super Bowl is really all about!!