A Heart in a Body in the World, by Deb Caletti 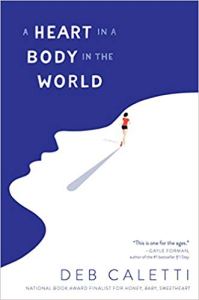 Annabelle is running. Running from her past. Running from her future. Just running. From Seattle to DC, her grandpa as her support team in his old RV, her friends at home a self-appointed publicity team. She’s not running for a cause, but her journey is embraced across the country nonetheless. And as Annabelle’s miles pile up and she meets supporters along the way, she begins to unravel the trauma that changed her life the year before.

It’s been several years since I’ve read a Deb Caletti novel. Honestly? I worried that I’d outgrown her stories the way I’ve outgrown many of the YA authors I loved a decade ago. It happens. Furthermore, I wasn’t sure this was my kind of book. I wanted to try, though. As I said, it’s been a few years.

A couple chapters in, I wasn’t sure I would keep reading, but now for a different reason. This book was stressful. In our current political climate, it’s difficult to read a story of a young woman who loses control of her personal autonomy. It’s difficult to read about violence against women, and bullying, and male dominance, and entitlement, and the taking of a future purely out of selfish pettiness.

This was a very good book. It discusses some deadly serious subjects and charged political issues, but handles them with grace and subtlety. (As much as that is possible, anyway.) The psychological changes that Annabelle undergoes are gradual and believable. The events of her past are uncovered slowly, revealing a series of warning signs that are all too easy to overlook.

Because that is the crux of the issue: Women are taught to be nice, to forgive everything, to empathize. Unless a man is showing blatant, overt hostility (and sometimes not even then), we’re taught to ignore the warning signs and give them the benefit of the doubt. Perhaps the man is sensitive or awkward or just needs someone to care for and understand him. We’re taught to disregard our intuition in favor of the man’s needs or feelings, even when that intuition is screaming RUN RUN RUN, and when we act on our intuition, we’re dismissed as “paranoid.” All the while, too many women don’t act on those instincts, and suffer the consequences of not being “paranoid.” None of this is okay.

And it was not okay for Annabelle, for her friends, for her family. One person in this book characterizes such psychological and physical violation against women as “a permanent life sentence.” The book, to me, is encapsulated in this one incredibly powerful paragraph:

“I live in this system, you know, you do, we do, where the control and the shutting up is such a regular thing that we sometimes don’t even see it. Where there are rules and rights for him and rules and rights for her and they are different rules and rights. The system says who gets to control who, and who is entitled to power and protection and who isn’t, and every day I run because I just don’t know what to do about it or how to change it.”

It was a very hard book to read, but entirely worth it. My love for Caletti’s writing and stories is confirmed. I never should have doubted.

4 Responses to A Heart in a Body in the World, by Deb Caletti