In my last running post, I talked about how I got started running and how I made it to my first 5K. I became addicted to running after that. It wasn’t always fun – wasn’t usually fun – but I felt good and I was making progress. I was never going to be a fast runner, since I was born with crooked feet, but I got to where I was averaging about a 12-min mile most of the time. This is the story of how I got to my running peak, up to when I fell away from running.

In the summer of 2012, I was diagnosed with a stress fracture near the top of my right fibula (the smaller leg bone under the knee). The X-rays showed a lot of swelling around the bone, and my doctors estimated that I’d had the stress fracture for about nine months. !!! I can pretty much pinpoint the day it happened. I was jogging slowly down a hill in those same crap shoes that had caused my shin splints when I first attempted the C25K, and suddenly my leg went numb from the knee down. There was no pain or anything, and I walked the rest of the way to the car. I went home and sat down and did some icing. It took about four hours for the numbness to disappear. I didn’t think much more about it a the time, but I’ll bet that’s when the fracture occurred. I ended up having to stop all exercise in my lower body (even walking) for 12 weeks that summer.

Once I was finally able to run again that fall, I got better shoes, and I was much stronger. This is when my mile time dropped from 14 mins to 12 mins. I became addicted to 5Ks, where I was averaging about 35-37 mins. There were regular 5Ks, and fun ones like mud runs and color runs. There were causes to support, like the Youth Orchestra of San Antonio and the Rape Crisis Center. On some 5Ks, I walked – I actually walked one with a 14-min mile pace, the same as I used to run! – some I ran, and some I did with friends in a combination of walking and running. My family participated from time to time, especially Morrigan. This time period was my favorite time for running.

Early in 2012, my local team from Sparkpeople began training for an unofficial half-marathon to take place a year later, in Jan 2013. Every week we went out to walk distances that grew progressively larger. I learned something important about myself: Even at my smallest sizes and my fittest self, seven miles was about the limit for my legs and feet to feel okay afterwards. Anything more than that, I could do, but I suffered for it. I pushed on though, and I decided that January to make this a double event for me. I would run the first 10k of the half-marathon, then walk the rest. Since I’d never run more than 3.5 miles at a stretch, I took the event slowly, running my 10K with a mile pace of around 13:15/mile, and then I went on to walk the rest of the 13.1 mile half marathon. It was the longest I’d ever run nonstop or walked nonstop. It was amazing. (Also, the audio for The Chopin Manuscript is pretty much what kept me steady and loving that 10k run portion!) 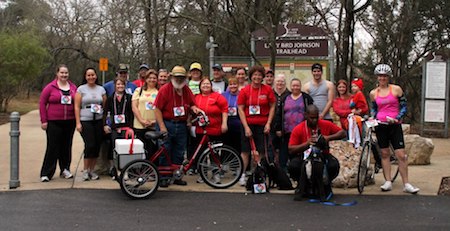 (our half-Sparkathon group and support peeps and puppy)

The success in that last event pushed me to greater goals, and in the summer of 2013, I began training to run a half-marathon. Unfortunately, issues with my feet eventually caused me to quit training. I still ran for fun, and even managed one of the only two 5Ks I ever ran under an 11-min-mile pace (10:53 to be exact, so not much lower, but STILL!). I switched focus to strength training, and six months later, had abdominal surgery, which made running impossible for quite some time. Then we moved to Boston, and that was pretty much the end for years.

Writing. Family. Books. Crochet. Fitness. Fashion. Fun. Not necessarily in that order. Note: agender (she/her).
View all posts by Amanda →
This entry was posted in Wellness and tagged fitness, running. Bookmark the permalink.