My Fitbit One broke. Boooooo! I only got it for my birthday last year, though I’ve been using a One on and off for the last five years. I love that thing. It’s the most accurate pedometer I’ve ever come across and it tracked elevation as well! But sadly, the One seems to have been discontinued, so my replacement is a Fitbit Charge. It’s a wrist strap, which means that 1) it’s very sweaty here in hot Texas, 2) it doesn’t track your steps properly if you aren’t swinging your arm (like when you push a grocery cart), and 3) it has a built-in heart rate monitor that seems to be semi-accurate (not sure yet if this will be helpful or harmful!). I’m sure I’ll get use to it, but I’m taking a few seconds to mourn my One.

*****
I’ve been learning (again) about my body’s exercise coping techniques. Most of my exercise involves yoga, walking (either outdoor hills/trails or indoor flat easy walks), and an occasional dance or elliptical session. My body is not quite back to the level of running, and I learned a long time ago that strength training with heavy weights does me more harm than good. This last weekend, though, I spent several hours helping with the front yard landscaping job. This meant a lot of shoveling rocky soil and hauling heavy rocks and breaking up tough ground with a pickaxe. 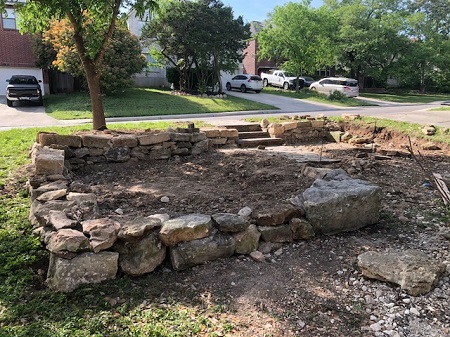 This may not be heavy weights, but essentially it ended up doing the same thing to my body. At the end of the day, I was somewhat sore and tired, and I was also S-T-A-R-V-I-N-G. That’s not an exaggeration. I ate nearly 1500 calories for dinner alone after that workout. I’d eaten well the rest of the day, so I still managed to squeak in with a small deficit, but y’all? Eating 1500 calories at a meal is so not good! And here’s the thing: When I compare what I burned on that day on my Fitbit Charge to the day before when my exercise consisted of a two-mile walk and 45 mins of yoga, I burned identical calories through the day, and the walk + yoga didn’t make me eat everything in sight! Lesson learned. The yard is coming along nicely, though!

*****
I’m seeing numbers on my scale that I haven’t seen since July. When we moved back to Texas, circumstances were crazy enough for the month before and after our move that I bumped up to the higher end of the range I’d been maintaining for a year at that point. My scale has flirted with the bottom edge of my Texas weigh-ins for months now, but this week I finally broke through some invisible barrier. There’s obviously not a huge difference between one number and the next, but the mental boost of finally reaching that short-term goal is tremendous! Now on to the next goal!!

In lesser news, I had blood tests for the first time in six months. While some numbers were good, especially when it came to my blood sugar, my cholesterol is way up because my LDL is way up. Triglycerides are down a lot, but I’ve got to get the LDL under control. So I’ve got to change up the way I’m eating just a bit to get that fixed. Ironically, six months ago my LDL was the lowest it had ever been and my cholesterol was doing great. Sigh. At least my insulin issues seem to be controlled!

*****
Back before we moved to Boston in 2014, there was a certain two-mile walk I liked to take on summer evenings once the sun had started to go down and the humidity was very low. The walk took me out of my neighborhood and around the middle and elementary schools, and a big chunk of the walk took place on what our family called the “wiggly sidewalk.” The boys, when they were little, used to run up and down the curves yelling, “Wiggly! Wiggly! Wiggly!” It’s an old family memory. I took this photo of said wiggly sidewalk back on a walk in 2012:

Ever since moving back to San Antonio last summer, I’ve wanted to walk from my new neighborhood down to this area and back, a 3.5-mile round-trip route. This week, I finally did it! Monday morning was cool and cloudy and perfect. This is a relatively flat walk (other than curving up and down the wiggles, and some very small inclines along the main road), so I just took it easy and enjoyed being back around my old neighborhood. We’re not very far from our old house – about two miles – and it was a pleasure to get back down to the area again. It won’t be a route I walk often as it’s all on major roads and involves a lot of stopping and waiting at intersections, but I’m so glad I finally took the time to do something I’d wanted to do for eight months now!

Agender empty-nester filling my time with cats, books, fitness, and photography. She/they.
View all posts by Amanda →
This entry was posted in Wellness and tagged fitness, house, Wellness Wednesday. Bookmark the permalink.