My oldest son turns 17 today (happy birthday, Morrigan!), which means that I’ve spent nearly 18 years as a mother (including pregnancy time). You learn a lot about yourself and about motherhood in that number of years. Here are a few that have been personally on my mind a lot lately.

Fat-shaming is common and accepted during pregnancy, even from medical professionals.
When I got pregnant with Morrigan, I weighed around 135 lbs – a perfectly normal, healthy weight for my height. I seemed to gain at the ideal rate throughout my first two trimesters, then suddenly began gaining tons of weight in the third. I wasn’t eating more or anything, just gaining more. One week, I gained six lbs or so between visits, and the nurse who weighed me then raised an eyebrow at me and said, “Been hitting the Ben & Jerry’s this week?” This is just one of many instances of other people commenting on my body – often in the negative – during this time. I can’t even enumerate how many other comments came my way over the course of my three pregnancies. It’s like having a baby in your uterus opens the floodgates to people saying whatever the hell they want to you.

Every body deals with pregnancy and the post-natal time differently.
As I said, I gained vast amounts of weight in my third trimester. Because of all the various medical professionals telling me that this was my own fault, I decided I had to “do better” in my second pregnancy. I once again gained ideally in the first two trimesters, only to gain massive weight in the third. By the time I got to my third pregnancy, I ignored all the advice. I didn’t gain a pound during the first two trimesters, so when I gained tons in the third, I actually had an ideal gain for the pregnancy. The same rules applied to labor and delivery (No, you don’t want me to wait until my contractions are five minutes apart because they’re four minutes long each and will never get that close) and post-natal weight issues (doesn’t matter how much I diet and exercise after birth, my body will not budge up or down until I hit some magical marker around 10 months post-delivery).

Not everyone enjoys being pregnant.
I hated every second of all three pregnancies. There was not one positive thing. And other than sciatica, I had relatively easy pregnancies – no morning sickness, no anemia, no major swelling, etc. And still, I hated every second. I hated trying to nurse my kids afterwards and gave that up fairly quickly, too. The sooner I could get back my body’s autonomy, the happier I was. I’m just not the pregnancy-loving type. And that’s okay.

Not everyone enjoys being a parent.
No, I don’t particularly enjoy being a parent. Sure, there are good times, and I’ve gotten a lot of joy out of my kids. I love them to pieces and treasure the memories we’ve created over the years. Not enjoying parenthood has nothing to do with whether or not you love your kids. This is something that our culture frowns upon. We don’t talk about it. People assume that if you don’t like parenthood, it means that you don’t like your kids or that you neglect your kids or that in some way you’re doing your parenting job wrong. Not true. For further discussion of this, I redirect you to Jennifer Senior’s All Joy and No Fun, which explains far better than I could the paradox here.

Not everyone wants to be a parent, including those who have chosen not to have kids and those who had kids anyway.
I love kids. Kids of all ages. I enjoy spending time with them. And I like giving them back to their parents afterwards. This is something I didn’t understand about myself when I got married and began having kids at age 20. Back then, I just knew I loved kids, and having spent a giant chunk of time essentially acting as a parent for my three younger siblings, I also figured I had a leg up on the parenting thing. But I was wrong on all accounts, and have since discovered that I’m one of those people who would have preferred lots of nieces and nephews rather than children of my own. (Ironically, my husband wasn’t sure he wanted kids, and then discovered that he loved being a parent…) Again, this doesn’t make me a bad parent – I love and nurture my kids, and do the best I can for them – and this is another taboo that I’d love to address in our culture.

Anyway. Those are some thoughts on this 17th birthday of Morrigan’s. Would I have done things differently, had I known myself better? Probably. Does it matter? No. I love and celebrate my son anyway. 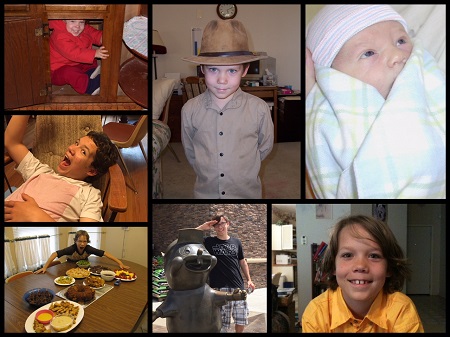 Writing. Family. Books. Crochet. Fitness. Fashion. Fun. Not necessarily in that order. Note: agender (she/her).
View all posts by Amanda →
This entry was posted in Personal and tagged Wellness Wednesday. Bookmark the permalink.