Sophomore year, 1988, and a stupid girls’ night out changes everything for Abby and her best friend Gretchen. Gretchen just doesn’t seem to be herself anymore, and the changes in her go from disturbing to worse. Soon Abby has to accept the unlikely: her best friend has been possessed by Satan.

Alright now! I’m once again split in how I feel about a book. On one hand, it was a compelling read (finished in a day) and quite fun for most of the book. On the other, it grew a bit heavy-handedly cheesy after a time, and seemed to glorify a time period that I just don’t like (the 80s). On one hand, it broached many serious topics such as class prejudice, sexual assault, and child abuse. On the other, none of those topics really went anywhere, and I felt a bit let down by the casual treatment. On one hand, it was quirky and well-paced and had interesting characters. On the other, those characters started acting out of character purely to push the plot one way or another, and other inexplicable things started happening to create tension/horror, which is when things tipped into cheesy for me. (Highlight for minor spoiler: I just can’t credit the tapeworm with the ice cream thing, for example. End spoiler.) 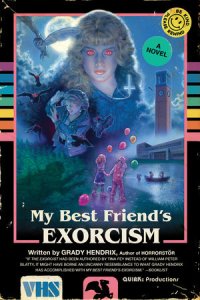 I don’t know. People raved about Ready Player One but I was never interested in reading it because it seemed to be a way to relive/worship the 80s and video game culture. Since I’ve never been into video games and there’s just about nothing from the 80s I look back on with fondness (not the music, nor the movies, nor the style, nor the politics, nor the books…), it just didn’t seem like my kind of book. I think this might be the same kind of deal. Before I went in, I didn’t realize just how much this book would read like a love letter written to the era. I imagine if it was set in, say, the 90s, that would have increased my enjoyment exponentially. There’d still be problems with the book, of course, but my personal fondness for the 90s might have outshone the negatives. In other words, I think I failed to connect with the book mostly due to the time-setting. So if the 80s are your thing, or you’re at least indifferent to the time period, My Best Friend’s Exorcism might work better for you. It’s certainly quirky and fun and fast-paced, and it has some of the most awesome cover art I’ve ever seen.

3 Responses to My Best Friend’s Exorcism, by Grady Hendrix