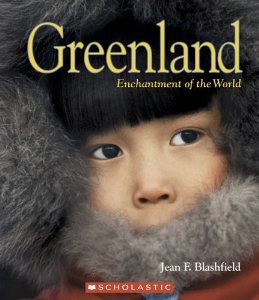 Wow. Greenland is a fascinating country. Their history is so varied – from multiple groups of indigenous peoples that came and went at different times over the last 4000 years, to viking settlement and Danish rule and later to almost-independence. Cultures, languages, and lifestyles all clash to make this really fascinating mix of living.

Most of Greenland is under a large ice cap, so the settlements there are relegated to the coast. Most stick to the southern part of the island, while a few Inughuits (Inuits who tend to stick to more traditional ways) live in the colder sections to the north. It’s hard for me to even imagine the way of life in Greenland, where the summers are like winters here and people live primarily on a few food sources: whale, blubber, reindeer, fish. There, the killing of animals is needed for survival, and all different parts of the animal are used, from the fur to make clothing to the bladders of polar bears to make traditional drums.

I can’t imagine this world, and while at first I thought this was not somewhere I’d ever want to go, I’ve changed my mind. I would absolutely love to go to Greenland, to experience their way of life, to see the huge ice sheets and glaciers and fjords. I was very happy to learn that while Christianity mostly took over the country over the last several hundred years, the Greenlanders have recently begun to take pride in their shaman-based heritage and are regaining all sorts of cultural things they had lost. There are museums and schools dedicated to the reclamation of heritage. I love it! I love seeing a country embrace their history and celebrate it!

I learned all sorts of fascinating things from this book. Like I had no idea that the geographical north pole and the magnetic north pole were not the same. I had never heard of the great auk, a diving bird similar to a penguin and related to puffins. Apparently they became extinct in 1844. I also learned about sports and events I’d never heard of, like ice golf, fingerpull, armpull, knuckle hop, and long distance sled hopping. There was a description of knuckle hopping, actually, and it sounds horribly painful. Competitors lay down and move forward by hopping only on their toes and the knuckles of their hand. Apparently it often ends in a lot of bleeding…

I was also excited to see that they have throat-singing there! I discovered throat-singing while studying Mongolia a few years back and it’s the most fascinating music that I think I’ve ever heard. Traditionally in Greenland, this singing was done by women. There’s also traditional drumming.

There is also a lot of art in the culture, though the Inuits didn’t call it art until more recently. My favorites were the tiny figurines carved to help get rid of spirit enemies. They were called Tupilaks.

There are some negatives in the country, though. They’re very dependent on Denmark and other Scandinavian countries for imports. The unemployment rate is really high (around 10%). There’s a high rate of teen suicide because many kids feel lost as to where to go in their lives as they get older. Plus there’s the lovely story about how the Americans set up a base in Greenland, forcing an entire town to relocate 60 miles further north, away from their traditional hunting grounds. Then they crashed a plane into the sea ice with four nuclear weapons on board, claimed to have cleaned up the bombs when they really left them in the ocean, and polluted the whole area with radioactivity. It doesn’t at all surprise me that Greenland wants America off its land. Sometimes I feel so sick being part of this country…

But there are good things too, like the fact that there’s no land ownership. !!! Or the 93% literacy rate. Many good things. I felt like there were more positives in this book than negatives, which isn’t always the case.

Unfortunately, I couldn’t do like I did the last two months and go look at animals from Greenland at the zoo or make any Greenlandic food. There are seals and walruses and killer whales at Sea World, but that’s a little bit out of my price range for hobby-studying, and besides, I’ve been there and seen them before. And Greenlandic food mostly consists of different types of fish casseroles (which I can’t eat) and/or uses ingredients I have no access to, like whale, whale blubber, or reindeer meat. Somehow I don’t think I can substitute beef. We almost had the right ingredients to make a berry dessert, but half the berries they mentioned are ones we’d never heard of, much less could find in Texas. Ah well.

But even without that sort of interactive learning, I actually had a really good time exploring the country. I’m definitely adding it to my places-I-want-to-go-one-day list!