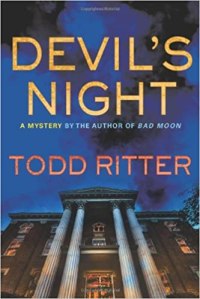 It’s the night before Halloween, and Perry Hollow’s history museum goes up in flames. It’s a tragedy, but becomes more so when a woman’s body is discovered in the wreckage – not burned, but bludgeoned to death with a cryptic message left on her arm: This is just the first. Kat Campbell is overwhelmed and dismayed at the prospect of another serial murderer in her small town…and things get weirder when the police discover a spray-painted pentagram left on the ruins of the museum.

This is the third and final book in the Kat Campbell series. I read the first two last year, and enjoyed them for the most part. I was really looking forward to getting back into this series during RIP. And at first, I enjoyed it. I enjoyed seeing Kat and so many other characters again. Some of the pithy little turns of phrases cracked me up, too. (Like, regarding an Italian businessman, “He lives for publicity, good or bad. He’s like the Donald Trump of Italy.” Ha! Even better given this book was published in 2013, well before Trump began his bid for presidency. He was a fool back then, too.)

But honestly, that’s about where my positives ended. There were too many attempts at elevating the writing to a pretentious level far above where a mystery/crime level generally falls. (Who just walks around talking about leitmotifs, honestly?) There was an attempt at a love triangle that came out of nowhere and was cut short by some major deus ex machina. The Big Reveal involved a huge stretch of believability. Then there was the following conversation, that made me stop and reread and want to bang my head against the wall, and beg that it was the character and not the author who was this ignorant:

“I figured it might help, it being close to Samhain.”
Kat was getting a headache. “Wait. Sam what?”

Y’all. Really? This is a character who is super pretentious about being a witch and a Wiccan, who goes on and on about various protection herbs and freedom of religion in America and how Halloween is co-opted from paganism etc, and then he goes on to say Sam-Hain instead of pronouncing it correctly? I mean, that could be the case. I’ve definitely met That Guy before. But if so, Kat is well old enough to have heard the very common mispronounced Sam-Hain before, and wouldn’t be confused by it. And it didn’t need to be like this, because that guy was pretentious enough to definitely say it correctly (on purpose, to cause confusion, as well as to show his superiority, like he does at every second in his conversations). Kat could have said, “Wait. Sow what?” instead, and that would be perfect. So while there’s a possibility it’s the character, I honestly have to think it’s actually the author.

I mean, the author also made it so this Super Pretentious Witch Guy didn’t know who Severus Snape was circa 2012, which is a pretty big stretch. Then he (the author) went on to spend an entire paragraph explaining, in minute detail, the shape of a pentagram, with analogies like, “the [stars] children draw in their first bursts of artistic creativity.” It’s a pentagram! We all know what a pentagram looks like! Just. Say. Pentagram. It reminds me of when Paul Auster described “bugs” (germs) as “that odd little word we all fall back on to describe the invisible contagions that float through the city and worm their way into people’s bloodstreams and inner organs” (Oracle Night). Or when Beth Fehlbaum explained what Chuck E Cheese is, and went into detail describing the structure of a knock-knock joke (Hope in Patience). These are not obscure things. Bugs, Chuck E Cheese, knock knock jokes, pentagrams…we know them, okay? Cut out the overly explanatory bits of the prose, and move on. Don’t treat readers like they were born yesterday.

Anyway. Story-wise, it was fun, and I liked the setup being a by-the-hour framing. But I think the book needed a lot of editing and revision, and for a third and final book in a good series, it was rather disappointing.