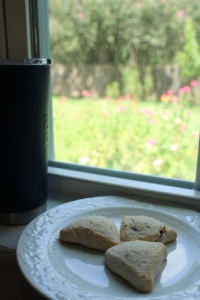 Yes, another kitty update. And if anyone is annoyed by that…well, there might be quite a few of these going forward, because after these kittens are off to their forever homes, I plan to volunteer as a foster for one of the local no-kill shelters. So there will be lots of kittens in my future! I’ve found this whole situation both exhausting/fretful and rewarding, and much of the negatives of that have been related to doing this solo. Jason and I have spent nearly $1500 on vet care alone, and trying to find home placements for these babies is hard when you don’t have a way to advertise them, so to speak. However, I do have good news on that front!

So I said last time that Gherkin is supposed to go to her home in mid-September. We’re getting the exact dates for that at the moment. Angus and Ghost are set to get neutered on the 20th, and then in the last week of the month, they’re going to their new home together! An employee at Jason’s company has been wanting to get cats for a few years now and she just lit up when she saw them, so we’re coordinating with her. Hopefully all works out well – I’m so excited that the boys will get to stay together! 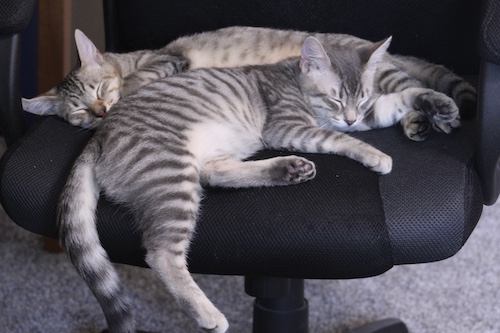 (Angus in the back, Ghost in front)

As for the feral colony, the neighbors have tried trapping our kittens’ mother, but she’s sooooo smart and the little grey Bert kitty is so stupid (he’s set off the traps at least half a dozen times, but he’s already neutered, so all it does it scare mama away!). Jason and I have seen the babies now. From a distance, we can’t tell if they are brown tabby or grey tabby, but they look identical to our kittens (they’re all brown tabby except Ghost, who is grey tabby). The neighbors plan to bring the two new babies into their house after they’re old enough to be trapped and fixed. We just really hope they can get the moms before they get pregnant again!! 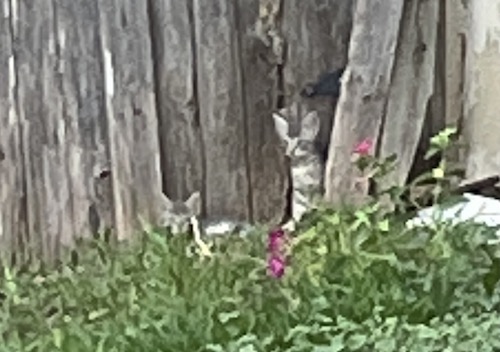 (wish I had a better pic, but it was dusk and they were far away and I only had my phone camera on me!)

That’s all for now. I’ll update again after everyone is off to their new homes!

Agender empty-nester filling my time with cats, books, fitness, and photography. She/they.
View all posts by Amanda →
This entry was posted in Personal and tagged Sunday Coffee, the ferals. Bookmark the permalink.