As I mentioned last Sunday, my family threw me a “buzzard party” for my 40th birthday. This is a longstanding tradition in our family, our version of an over-the-hill party with more jokes about how the buzzards are circling and fewer “old fart” jokes. We have several stuffed buzzards and a buzzard piñata that float from party to party, as well as a cane with a rearview mirror and manual horn, a windup turtle that goes very very slow, and a bunch of buzzard-themed party decorations that we’ve managed to collect over the last few decades. I’ve been looking forward to my buzzard party since I was a teenager!

It didn’t disappoint. Jason was in charge of the planning, and he went above and beyond, giving my party a little spinoff twist that was more our style. In other words, he built me a coffin. Ha! We don’t normally have actual funereal decor at these parties, but Jason threw my party as my “half-funeral,” complete with gravestones and mourning clothes and a eulogy read by my youngest son. I had to actually get into the coffin for the eulogy, and later for opening gifts. (A great number of party attendees eventually got into the coffin, ha! Ambrose and Laurence actually got into it together!) 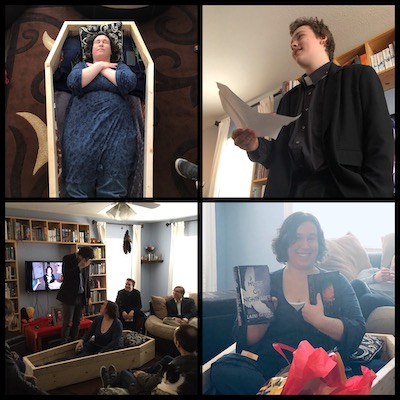 The party was wonderful. My parents and most of my siblings were able to come into town for it, and my brother (the only one who couldn’t) skyped in for part of the party. A couple good friends came as well. We had a Boston cream pie poke cake with the words “Our Condolences” written on it, and deviled eggs dyed with black food coloring, and my mom even brought black roses to go into the coffin. I was showered with gifts, and most of the party was spent retelling old family stories and laughing. It really was the best way to end my birthday weekend!