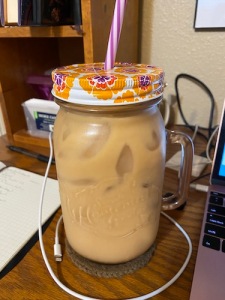 I had a really good birthday this year, so I wanted to document it in detail. Feel free to ignore me, heh.

Morning time was taken up by the Get Your Rear in Gear 5K, which of course I already talked about. And as I said in that post, the 5K was followed by gluten-free pancakes with nutella on top. Mmmm.

I didn’t have any big plans for my 41st birthday. Of course, last year was my huge Buzzard Party, and after that, I figured we’d just have a nice, quiet day this year. Jason and I watched a few episodes of the Great British Baking Show in the late morning/early afternoon, and I made deviled eggs for my afternoon event.

My hiking group was founded on March 2nd last year, and so the group got together for an anniversary potluck on Sunday afternoon. I only joined the group in December, but it’s already made a huge impact on my life, health, and emotional wellbeing. Even though it was my birthday and even though I really don’t like driving long distances to unknown places, I knew I had to go. The potluck took place in a nearby town called Boerne, which might not have been such a long way away (45 min drive!) if the entire trip hadn’t been under construction. Oy. I’m just thankful my GPS got me there in one piece without any real trouble! Food, speeches, gift exchanges, group photos…it was worth the drive. I love these ladies.

(Sadly, I had to leave before the big group photo was taken. Photo courtesy of the SA PS Women’s Hiking Group.)

One really cool thing happened there that I have to write about. I didn’t expect to eat much at the potluck (gluten free and all), but one woman, Alia, made this Middle Eastern chicken and rice dish called biryani. Lebanese food is my favorite ever, so I got a little of this dish to try. Because it had onions in it, I didn’t think I could eat it. I haven’t been able to eat onions since my anosmia distorted in October 2018 and made everything smell of rotten onions. (Thankfully, it’s now only oniony scents that smell this way, not everything!) Indeed, much of the food at the potluck must have had onions in it, because the whole area smelled rotten. BUT. The onions in Alia’s dish tasted sweet and caramelized and exactly like they’re supposed to. Maybe it was just because my nose was partially stuffed up, I don’t know, but you can believe I went back up and got a bunch more of the dish!! Onions were my FAVORITE before this stupid anosmia issue!

I ended up eating enough at the potluck that I decided not to go out for dinner that night like Jason and I originally planned. Our birthdays always include one special prepared meal and one restaurant meal. Nutella pancakes were obviously my prepared choice, and I saved my restaurant for later in the week. So instead of eating out Sunday, we had cake for dinner. Mmm, cake…

You might notice the sloppiness of the above cake. That’s because this particular dessert was an experiment of Jason’s and Ambrose’s, chosen by me. None of us are really huge traditional cake fans. Morrigan always chooses a cookie cake, Ambrose likes pie, Laurence likes muffins, etc. This year, I wanted an entremet cake using my very favorite dessert, chocolate bavarois. So this cake had four layers: a gluten free shortbread crust, a blood orange curd, a chocolate bavarois, and a chocolate-orange mousse. Extremely decadent! Unfortunately, the curd didn’t set. Boo. That’s what you see slopping around in that photo. But messy or not, the cake was amazing and the sort of dessert where a little goes a long way, meaning there were lots of leftovers to enjoy all week! (And yes, I did eat all my layers separately, so that I could save the bavarois for last. If it wasn’t SO bad for me, I’d have asked just for a bowl of bavarois for my birthday “cake.”)

Then there were the gifts. Jason is the most amazing gift-giver and always has been. This year, he decided to theme my gifts. He called them my “year of adventure.” There were glass coasters with photo inserts so I could celebrate my past adventures. There was a Pop doll of Anne Wheeler (love her!!) from The Greatest Showman, to share others’ adventures. (It’s also kind of a wishful thinking adventure, as I’d LOVE to be able to do acrobatics one day!!) There were hiking poles, a map of the nearby countryside, and a membership to REI for my current adventures. Last but not least, there was a travel guide to Hawaii to plan for (distant right now) future adventures. It was so perfect.

I also received a few other great gifts and cards from friends and family throughout the week. Plus I won free leggings from my Lularoe dealer (ha!), and got gift cards and movie tickets from various businesses I frequent. It was all quite nice.

My birthday night ended quiet and calm. Lying on the couch with Jason, watching more silly baking shows, getting my legs and feet rubbed post-5K, enjoying my first birthday in our new home. It really was absolutely perfect.