This year…didn’t really go as I’d planned/hoped/expected. Pretty much everything my family expected from the year got turned on its head. Not all of it was bad or anything, just different. And really, just so FULL. My extended family added two new babies, a new spouse, and a new fiancé. We had a total of seven surgeries spread out across the summer. Morrigan graduated high school and spent a week out at the Appalachian Trail. Ambrose took his SATs and was on the homecoming court. Laurence performed in multiple plays in addition to doing tons of volunteer hours. In many ways, it would be hard to wrap up the year if I just had to list out All The Things (hence monthly wrap-ups!). Instead, I’ve looked back at the year as a whole and marked down the things that really defined it for me, both good and bad. These are roughly in time order.

Hives. In the last couple days of 2018, I began to break out in hives. For the next five months, they plagued me, and even now I’m on tons of medication to keep them at bay. In the first half of the year, I saw multiple doctors, had multiple tests, took multiple medications. Eventually, to the best that we can figure, we discovered that I’m either allergic to certain kinds of probiotics, or I have an unknown autoimmune disorder that is causing those probiotics to get into my bloodstream from my gut. Fun! Honestly, during those five months, I could barely think of anything but my health. Everything was under scrutiny and I was under constant threat of attack. It was awful. It reminds me of a quote from What Alice Forgot, from a character who has suffered from nearly a decade of health issues:

I understand now why very sick people and the elderly have such a compulsion to tell you everything about their health. My [illness] fills every corner of my mind.

Buzzard Party. I turned 40 in March, which means that I finally got to have my buzzard party – a thing I’ve wanted since I was a teenager. Jason even built me a coffin to lie in. It was awesome. 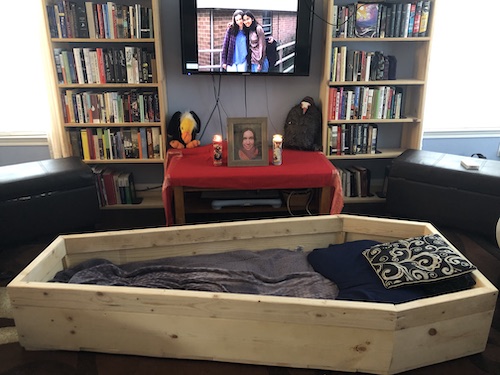 Carbs. Midway through March, I changed my diet. After seven years of eating low(ish) carbs (about 35-40% of my diet), I changed to a higher carb ratio. And as it turned out, so many of the irregular, inexplicable symptoms I’ve had for all these years were related to the lowish-carb diet. While I still have health issues, I feel about a thousand times better than I did before I started eating this way. 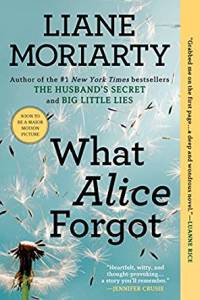 What Alice Forgot. Normally I don’t include books in my year-in-review, because books get their own post. This one is special, however. I read this book at the end of April, and it affected me in so many ways. I was able to use rereads of the book as a coping mechanism for my normal May PTSD moments. It influenced my choice to join a gym and some group activities. It gave me a framework for the last few years of emotional pain/distress and helped me to sort through a lot of that. For about two months, I didn’t read much beyond this one book, and it stands out as a significant part of 2019.

Harry Potter Wizards Unite. I know most people gave up on this game within the first few weeks of playing, but I’ve loved it so much. I love that new things keep being added, and I’m so happy to meet new people through Community Days. It gives me an excuse to go out and spend time walking as well. Conversely, a lot of the exercise regimen I’d built up before this game released came to a halt afterwards, because I spent my time on the game instead. Still, I don’t regret it. I’m working to find balance. 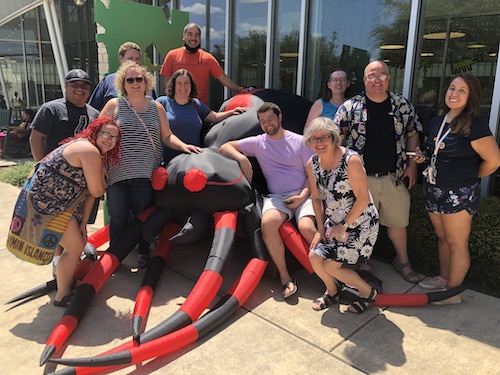 Morrigan. “Full ride to school. No, partial ride to school. No, never mind, no scholarship, cannot afford to go to school. Community college instead. No, military. Won’t be for six months though, gonna go to work now. Oh wait, it’s only been a month but off to the navy now. Um, boot camp didn’t work out, being separated out and sent home. Gonna work until the fall and go to school then. No, let’s just go to school in January and take out lots of loans.” Oy. It’s like we had six months of pinball life.

Fantasy Football. Football has been a big part of the year for a few years now, but this is the first time I’ve ever been in any fantasy football leagues. My brother-in-law set one up for twelve of us, no actual money/gambling involved. It has been an interesting experience, and takes up quite a bit of my time each week. I’ve enjoyed it, but I’m not sure I’d do it again. (Though who am I kidding? I’ll probably do it again, if the family wants to.) PS – I find out after this week’s games if I come in third or fourth in our league. It’s Laurence and me against each other, ha! ETA: PPS – I came in third. 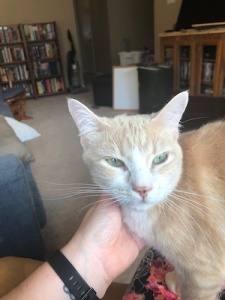 House. One of my goals this year was to help get our finances under control. This did not happen. Every month, just about, we took more steps back. Eventually we accepted that the only way we’d be able to balance our budget was to downsize. As much as we liked our house, it was too big and too expensive for us. Things went faster than expected once we started the process, and it was a mad scramble to simultaneously move into one house and get another house on the market. Pretty much the last few months of the year were taken up with this project.

I’ve said it before, and I’ll say it again: I feel like I’m at the beginning of my own new start. I’m living in a new house which is better for me physically and better for my family financially. My oldest son finally found direction, and my middle son is already preparing for his fall entry into college. I’ve had a few personal epiphanies over the last month, and I’ve begun connecting with people (new friends and old) for the first time in about three years. Each year, I say goodbye to the previous year’s troubles and both hope and plan to make the next year a great one. So far, that hasn’t happened since my life fell apart in mid-2014. It’s been a whole string of bad or mixed years stacked up on each other, some due to bad luck, some due to mental health, some due to bad decisions. I can’t control for all of those things, and I don’t know if 2020 will break the streak. But personally, I’m going into this next year determined to give my all toward making it great.