Chopping down trees – this is a thing I do not like to do. Unless the tree is dangerous or dead, I’d rather keep them up no matter how annoying. At my pre-Boston house, we had two ash trees that would drop so many seeds each year that they would blanket the entire front yard. We basically had to rake up ash seeds, which is extremely difficult. But we still never cut them down.

When we bought this house last year, the front yard was done up nicely. There were five trees providing plenty of shade, and despite the slope, everything looked beautiful. Then a couple things happened. First, there was a hurricane-turned-tropical-storm that blew through San Antonio. Our neighbor had a tree fall where it was sitting on a similarly-sloped lawn, and we decided we needed to build a retaining wall around the tree that was on the most sloped part of our lawn, making sure it could stay upright. Then all the chinaberries began to drop from two of our trees, littering the entire yard and driveway. With that litter came the flies. Thousands of them, feasting on these dropped berries, which is just gross gross gross. Then we realized the sloped yard was eroding, and began to xeriscape. We built carefully around all our trees to make sure none were damaged. We researched local, non-invasive species to plant. And once it was all done, thousands of little tiny plants started sprouting throughout all our new beds, all identical.

As it turns out, chinaberry trees are pernicious and highly invasive. Wherever they drop berries, new trees will grow, and when you pull the seedlings, new trees will grow from the same damn berry over and over and over again. And we had thousands of these berries in our yard. Back when there was grass, the seedlings would get mowed and we never even noticed them. But we did notice the way that grass didn’t keep growing in our yard, and how the lawn was slowly turning into a dirt pit. We thought it was erosion, and that was some of it, but some of it was just that the berries acidified the soil and made it impossible for grass to grow and hold the dirt down. Every week post-xeriscaping I would pull these weeds, and yet they kept taking root. They would grow in the most unlikely places, like under rocks as the one in this picture. 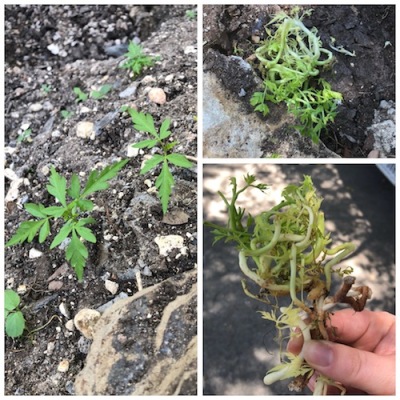 When the berries started dropping again this year, we bit the bullet and called someone to chop down both of our chinaberry trees. In researching, these and hackberry trees are the only two that San Antonio recommends cutting down even if the trees aren’t sick or a danger to structures. They are that invasive. We couldn’t really afford the cost – not to mention needing to plant a new tree to eventually replace the shade to our yard and house – but we did it. 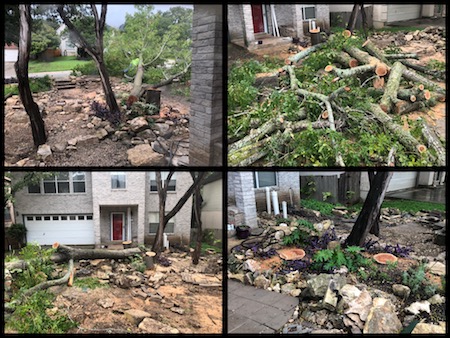 Our yard looks very different now, and we have to restructure our xeriscaping around where the new tree will go. I suppose it’s good that we were having to do this restructuring anyway due to the plumbing issues, and that there was nothing permanent for these trees to destroy as they came down.  It’s frustrating nonetheless, and we just hope we can find a good place to plant the new tree, far enough from structures, driveway, plumbing, and the previous chinaberry tree roots. And we hope that the trees won’t just start growing back, given their pernicious nature. In the meantime, we’ve chosen a native, non-invasive species to put in our yard, a live oak. It’ll be years before it’s fully grown, but that’s totally worth it for a tree that won’t cause all the trouble that those chinaberries caused!

4 Responses to Sunday Coffee – Chopping Down the Chinaberry Trees