As I’m pretty much trying to at least maintain this summer, with everything else going on, I decided to keep reminding myself that things could be worse, and keep myself motivated to stay the course, even if that course is just maintaining for now. 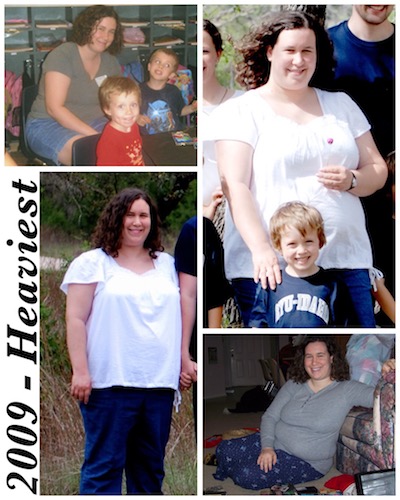 Me, at my heaviest, in 2009. I was miserable. I’d gained 60 lbs in the last year and was far above the heaviest I’d ever been before that (about 40 lbs higher than ever before!). I was still sick and didn’t know what was causing all the problems. By the time that all got figured out, I’d pretty much given up.

Me, at my lowest (post-pregnancies), in spring 2014. You can just see the difference between the way I felt in 2009 vs how I felt in 2014. Not only was I 100-105 lbs lighter, but I was fit, healthy, and happy. According to my BMI, I was still technically overweight (by one pound), but I didn’t care. Totally satisfied with where I was at and how I looked. I felt amazing. 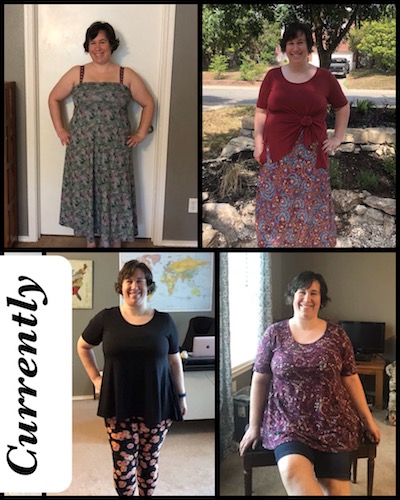 Me currently, about 30 lbs under the the first collage of pictures, and about 70-75 lbs over the second set. This is where today’s reminder comes in. First off, while I’m only 30 lbs under that first set of photos, I’m a lot smaller than I was then. I’ve built a lot of muscle over the years, which means my body composition is very different. Second, the abdominal surgery I had in 2014 made a huge difference in my body shape, and even at this much higher weight, I’m not nearly as self-conscious about my body as I was pre-surgery. In fact, I’d say I’m less self-conscious now than I was 70 lighter and pre-surgery. Third, I’m not doing that thing where I wear whatever happens to be around just because I’m obese. I’m wearing things I love and things that work well for my body. So even if I’m not as small as I’d like to be, I still think I look just fine. That’s a major psychological difference this time around.

It may be several years before I can get back to my goal weight, but in the meantime, I want to remember just how far I’ve come, and how far I haven’t fallen, mentally and emotionally, as my weight increased this time.

3 Responses to Wellness Wednesday – Another Reminder