Life before death. Strength before weakness. Journey before destination.

There are many ways to interpret these small phrases of course, but that last bit has become very important to me over the last few months.

I’ve spent a lot of time thinking about journey versus destination, and how aiming for an end-point instead of focusing on the path can be self-defeating. If you don’t experience the path and only long for the finish, is it really a journey? Can you really get to that end? Anyway, philosophy aside, I realize that the times in my life that I’ve been most successful have been the times when I focus on my journey rather than my destination. Example:

In college, I began to realize that my education had been inadequate. Though I did well in school, I went off to college without some basic knowledge that other people seemed to have. I couldn’t point out where all the US states were on the map for example, and didn’t come close to knowing their capitols. There were books everyone had read in school that my schools never assigned. My vocabulary was extremely limited, which for a writer is a really bad thing. I felt deficient in just about every part of education, and that grew as I took classes in a college that was just as easy as high school, so that I didn’t learn much at all.

After Morrigan was born, I decided to take my education into my own hands, starting with my woeful lack of book knowledge. I wasn’t at all well-read, and I wanted to be so. Instead of focusing on that end (being well-read and knowledgeable in literature), I made a goal for 2001: to read a book per week all year. Long story short, I began with Maugham’s Mrs Craddock and followed through with my goal all year. At the end, I wasn’t a well-read person, but I’d certainly gotten much closer to that goal. More importantly, I’d also discovered authors I loved, and a joy of reading that I’d lost for nearly a decade, and improved my vocabulary and writing skills – things I hadn’t even planned for.

A similar thing happened in 2011 when I started my weight loss journey. I had so much weight to lose, and instead of asking myself to lose quickly, I made a long goal (over two years) and focused instead on the daily/weekly habits I would need to eventually reach that goal. Some of the goals were tiny (eat one fruit and one vegetable per day six days per week) and some were slightly more ambitious (complete the C25K program). I wanted to lose 50 lbs in 2011, but that number was so big and the date so far away that I had to focus on the smaller steps by necessity. I added one habit after another, slowly over time. 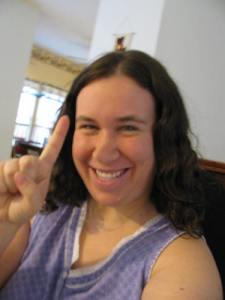 By the end of 2011, I did manage to lose 54 lbs. Better than that, though, I gained so much. I became a runner, which completely changed my body composition. I learned to eat produce for the first time in my life. There were so many gains: self-confidence, no self-consciousness in wearing shorts outside, trying out so many different fitness things that I loved, etc. I grew so much that year, which had very little to do with losing 54 lbs – that end point was just a result, not part of the journey.

In the last few years, I’ve spent far too much time thinking about the goal rather than the journey. There’s a part of me that says I’ve already made this journey, I already know these things, what would be the point of re-learning? But there IS a point, and that’s what I need to focus on now. Journey before destination. Yes, I want to lose weight. Yes, I want to be a runner again. Yes, I want to be strong. But those are ends. I need to focus now on the individual steps, one at a time, slowly, that will take me to where I want to be.

Today, on the summer solstice, I start this journey again with a new focus: the journey itself. I’m not sure how much I’ll talk about it here, but I’ve got a personal journal that should last the next year or more, and I’ve made a private instagram account for daily motivation, accountability, and observations. Yesterday’s post talked about needing to internally regroup. I’ve been thinking about this for quite awhile, and today, I take that plunge.

4 Responses to Journey Before Destination