Turning leaves, shifting winds, airing out sweaters, and pumpkin-everything – wishful dreaming for this part of the world. With the temps sticking in the swelteringly hot upper 90s (if not higher), the start of RIP-season is a welcome occurrence. Soon, soon, the season will begin to change. In the meantime, I can pretend with books! 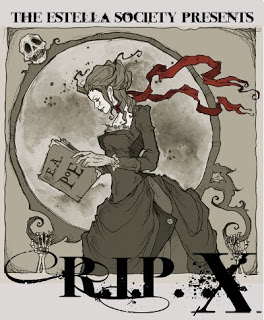 Readers Imbibing Peril is in its 10th season now, founded by Carl at Stainless Steel Droppings and run this year by Andi and Heather at The Estella Society. (Big thank-yous to all of you!!!!) As usual, I’ll be gobbling up books in the following categories:

With my ankle all wonky and trying to heal – more on this on Wednesday – there’s a good chance I’ll read more than I usually do. I’m definitely doing Peril the First (as usual), in addition to possibly participating in Peril of the Short Story. And who knows? I did just watch Nosferatu this past weekend, so maybe I’ll have some Peril of the Screen entries, too!

Okay, so even with a wonky ankle, I don’t think I’ll get to all of those. But that list leaves me plenty of wiggle room for playing!