Pretending to be Erica, by Michelle Painchaud 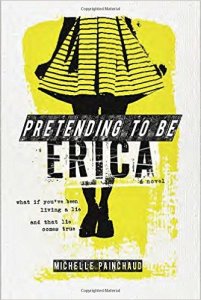 Kidnapped thirteen years ago, at the age of four, Erica Silverman is the holy grail of cons. Her parents are filthy rich, and built somewhere into their library is a safe containing a painting worth millions. More than one “Erica” has come forward, claiming to be the real thing, only to be found out. This time, however, “Erica” is more credible.

Violet has been raised to be Erica. Adopted at the age of five, her father is one of the biggest con-artists in Vegas. He’s groomed Violet to know everything about the Silvermans. He’s taught her Erica’s history, trained her in the things Erica found interesting, even given her multiple plastic surgeries to make her look more like the real thing. See, Violet and her father have one thing that no previous Erica had – the truth. They know what happened to the real Erica, and that makes all the difference.

Confession: In the flurry of all the books I put on hold to investigate, I got this one confused with several others and thought it was going to be a book about a transgender teen. Nope. Second confession: I am extremely wary of books told from the point of view of con-artists. Especially if the con-artists are sympathetic, and most especially if the idea of conning is revered in any way by the author. Take Fingersmith, for example – everyone loved that book, but I hated every moment of it. Just not my thing, right? So it really seems like, with these two confessions, I should have read a few pages of this book and decided it wasn’t for me.

I didn’t. I kept reading. Violent was a fascinating character. She was a victim as much as a villain, and her ever-evolving psychology kept me hooked. But wait – this could easily apply to Fingersmith, too, you say. Perhaps. But the two felt different. There are two different kinds of books/movies about con-artists. The line between them is very fine, but they are extremely distinct for me. Fingersmith fell the way of Count of Monte Cristo for me, whereas Pretending to be Erica fell the way of Now You See Me. Other readers, I’m sure, would not make the same distinction. Whatever the reason, this book really worked for me.

I loved seeing the Silvermans’ story unfold. I loved the balance Violet had to maintain, ever-more-fragile, inside herself, between the person she is and the person she must pretend to be. I loved the emerging truth that both selves – Violet and Erica – were equally false, because Violet has never been given the chance to be herself. She’s been groomed and manipulated from the beginning. Even after all this, she’s desperately attached to the father who…was not exactly the best father, beyond being a con-artist. The contrast between his warmth and coldness was terrifying.

Of course, no book is without its flaws. Some of the procedural stuff didn’t seem terribly credible (to say anything more specific would get into spoiler territory), and I thought Violet gave herself away more than she realized (though that might have been intentional). Mostly, though, this was a solid book: a fascinating look into an interesting psychology, and a captivating drama that kept me reading.