It’s been a big month. I started to get back into hiking just a little, I had a couple photo shoots (including one I was hired for!), then of course it was Thanksgiving this month. Plus getting covid for the first time, boo. Lots of big things.

Reading and Watching
Well, I didn’t read much this month, only finished one book, Bleeding Heart Yard. At least it was a good one. On the other hand, I watched WAY too much TV. The newest episodes of Manifest were finally released, and I binged those in addition to going back through the first three seasons. GBBO wrapped up and the holiday episodes released. There was more trash reality TV aka Love is Blind. Jason and I were going to watch Wednesday over this past weekend but of course covid interfered with that. So that’ll come in December. 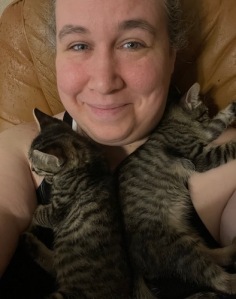 Not much to report. Dexter and Deedee returned to the shelter for surgery. When they hadn’t appeared on the adoption list in eight days (normally the turnaround is 2-3 days), I was worried that their neurological condition had caused surgery to go poorly, which can happen. I wrote the foster office and it turns out there just wasn’t enough room down at the adoption center, so they were waiting their turn together still at the hospital wing. They finally showed up on the website on the 29th. I did write up bios for them that will hopefully encourage them to be adopted together, but we’ll see.

Health/Fitness
Like I said above, I did manage to get a few short hikes in this month, as well as a few yoga workouts. My body is definitely more mobile than it has been, but I still have limitations and I’m trying not to push too hard. As for the Mounjaro/weight update, Thanksgiving and covid both affected this, but I’m ending the month about 3 lbs down for a total of 14 lbs lost in the 13 weeks on this med. This is exactly the slow, steady rate we’re looking for. My doctor and I are waiting until I plateau out before moving me up to the next level of the medicine, so that we’re not rushing things and causing a bad reaction like I had to Ozempic. Meanwhile, I’ve hit my lowest weight of 2022 this month, which makes me happy, and if I can continue around this rate of loss, I’ll be back to where I was pre-Ozempic in a year. Yeah, I’ll still be obese and I’ll still have a long way to go, but I’ll be miles better than where I’ve been for the last couple years, the last year especially.

Right now I am hella grateful for the scientific community. My vaccines – even though I haven’t had the latest booster yet – have kept my covid case manageable. Not pleasant. It felt like I simultaneously had a terrible cold, a mild flu, the beginnings of bronchitis, and strep on top of that. Yeesh. I know that without the vaccines, I would have been in the hospital. My immune system basically doesn’t exist at this point. At least this was just unpleasant. The worst part was actually the severe reaction I had to the antivirals, which almost landed me in the ER…

Jason tested positive the day after me, but he had his omicron booster recently (I haven’t had mine yet) so his symptoms have been fairly mild. My sister, brother-in-law, and stepmom also tested positive, so whatever my dad brought to Thanksgiving must’ve been particularly virulent! We’re all recovering now, but it’s going to take time. Meanwhile, it appears as if my mother is having either flu or her third round with covid in 11 months, unvaccinated, and without proper medicine. At this point, her ignorance and willfulness is just really sad. She absolutely knows she’s in the wrong, her pride just refuses to admit it.

Top, left to right: the red queen; grasshopper; two giant cats trying to sit in a bed meant for one
Bottom, left to right: sad Gavroche after all the fun new people left the house; my brother-in-law and sister at Thanksgiving; my uncle and his puppy

All six of these are of course from my Witchuals photoshoot back on the 13th. It was hard to narrow this down to six favorites, but this is what I chose!

Highlights of November
For the most part, it was actually quite a nice month. Even the bad parts had their up-sides. Here are some of my favorite moments:

Coming up in December
Laurence comes home mid-December, and Morrigan and Katy will be here over Christmas. At the end of the month, at our annual NYE bonfire, we’ll be scattering my grandma’s ashes. I have quite a few events and outings scheduled already, but we’ll see how many of them I make it to – I really don’t want to push myself too hard while my body is healing from covid! Hopefully, though, it’ll be a very happy month!

Agender empty-nester filling my time with cats, books, fitness, and photography. She/they.
View all posts by Amanda →
This entry was posted in Personal and tagged health, photography, quarantine, the ferals. Bookmark the permalink.