Top Ten Books I Had to Own in Print

I knew it had been awhile since I last posted for Top Ten Tuesday, but I hadn’t realized it had been since Feb 2019!! I thought it was the pandemic that moved my posts away from these lists, but apparently I got lazy about it even before then. Heh. In any case, I really liked today’s topic, which is technically “Top Ten Books I Loved So Much I Had to Get a Copy for My Personal Library,” but customizable to your unique situation. I decided to set up my list as the top ten books/series that I had to own in print even though I first listened (and also own) on audio. In most of these cases, I’ve never even read the physical books, but I still loved the stories – both audio and book – enough to buy hard copies for my library. Which is saying a lot, because I keep my library minimal, maybe 100-150 books altogether, culling all the time.

In no particular order: 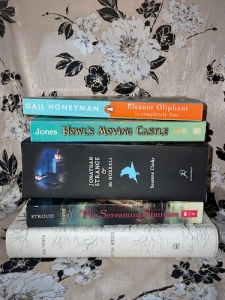 Eleanor Oliphant is Completely Fine: This was a multi-read, probably listened to four or five times in a row, and definitely deserves its place on my shelf.

Howl’s Moving Castle: Tried reading in print multiple times and never made it far, so the audio really brought this one to life and it became a fave!

Jonathan Strange and Mr Norrell: Ditto everything I said about Howl.

the Lockwood & Co series: Ironically, I didn’t even particularly enjoy the narrator for the later books, but I’ve still always listened while also collecting the physical editions…

the Dublin Murder Squad series: At first, I wasn’t planning to get these books in print, but I kept finding the first at used book sales, and I loved having it around so much that I ended up collecting the rest at HPB over time.

the Divine Cities trilogy: It helps that I met the author and bought the first book for signature at his event, long after listening to the series.

Good Omens: Because why wouldn’t you own Good Omens in every possible format?

Gentlemen and Players: This is another of those that I’ll never read in print – and I re-listen most years – but it makes me so happy to see it every time I look at my library.

the Raven Boys series: I think technically, I may have read the fourth book in print before the audio, simply because I was dying to know what happened, but I still mostly listen to audio on revisiting

The Host: The audio narrator (Kate Reading) is my favorite and she made this book for me, so I’ll always revisit on audio, but still, there it is on my shelf.

Honorable Mention – the Sin Eater’s Daughter trilogy: Technically, this is an 11th entry, and I don’t include it in my top ten because an audio edition of the third book was never made. Unfortunate, because the narrator (Amy Sheils) is incredible. So I only own a physical copy of the third book, while owning both audio and print of the first two.

Do you keep physical books around when technically you only read virtual copies (audio or ebook) of them?

Agender empty-nester filling my time with cats, books, fitness, and photography. She/they.
View all posts by Amanda →
This entry was posted in Book Talk and tagged lists. Bookmark the permalink.