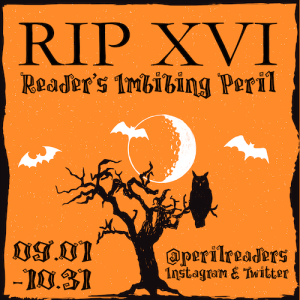 It was a weird RIP season for me. I really started reading much earlier than usual (and technically before the challenge started), and then ended up culling most of the books on my original list. Normally, I read tons of books in September and October, because this challenge kinda invigorates me, but that didn’t happen this year. In the end, I only read eight books for RIP (and only if you count the few I read prior to the challenge officially starting). In order of when I finished:

And of those eight, it was a pretty mixed bag, with five that I enjoyed and three that I didn’t. Even those I enjoyed broke down into two that I loved and three that were good but not phenomenal. Beyond those eight, I literally cut another nine from the list, read one from the list that didn’t end up being RIPish at all, and was unable to get my hands on four in time for this challenge. Oh well. Best books of the challenge? All Our Hidden Gifts and The Ex Hex.

I hadn’t actually looked at this card since the challenge started, so I’m pleasantly surprised by how many categories I ticked off! No vampires or masks or creepy fungus (I read that book last year, ha!), wasn’t into the group book, and I don’t cook so I didn’t make any meals. But I got 19 categories plus the middle freebie, for quite a few bingos along the way! 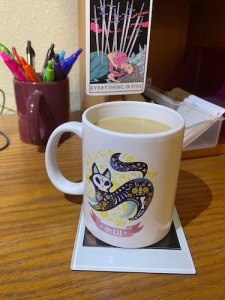 As for Halloween itself, it’s been a rather enjoyable, if subdued, spooky season. Decor got up a little late, but it happened. Pumpkins also acquired late, but acquired. Jason bought me Day of the Dead mugs and a spooky light projector and ghost lights for my bedroom. Laurence and his friends decided to go trick-or-treating dressed up as witches (complete with pointy hats and black skirts). I didn’t read as many spooky books as usual, nor did I watch many spooky movies. But I discovered a new spooky podcast (Uncanny), and I’m hosting a spooky haunted Halloween hike tonight in addition to giving out treats. We had fire pit s’mores on cool nights and took amazing photos of the full moon. For a year when my mental health hasn’t been great, this slow-speed holiday season was kind of exactly what I needed.