Sunday Coffee – Camping, Except Not

I’m supposed to be at Inks Lake right now on a weekend camping trip.

I’ll be honest: I never thought I’d go camping again as an adult. My family used to camp a lot when I was a kid, not because anyone particularly enjoyed camping, but because when we traveled, we couldn’t afford hotels. Campsites were cheaper. We lived in South Carolina, so every time we went to Charleston or Myrtle Beach or to the nearby lakes or mountains, we camped. Then I got older, my family got larger, and the camping grew more infrequent as first we couldn’t afford vacation and then my parents divorced. The last time I remember sleeping in a tent was in 1999, at a trip to the Frio River with my mom’s extended family. By that point, I hated sleeping on the ground. As I went off and started my own family, I expected never to camp again. 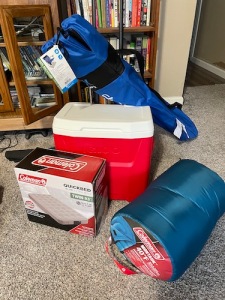 And then here we are. I got convinced to give it a try by Becoming Odyssa and my fellow hikers. We were planning to spend the weekend at Inks Lake State Park, hiking during the day and camping at night. I bought all my supplies – tent, AIR MATTRESS, sleeping bag, cooler*, chair*, food, etc. (*Note that the cooler and lawn chair were actually things I needed outside this trip, as my previous ones went kaputt.) I was nervous and excited and actually looking forward to the trip, while simultaneously hoping that the whole sleeping-in-a-tent thing would be better on an air mattress and that I wouldn’t be miserable all weekend. Heh.

Then there was my foot. So, you know that hope I wrote about and all that jazz, just a few days ago? Well, that day, my foot started to cramp up and swell. And it just kept getting worse. I realized: the longer I put off letting this foot rest, the longer it’s going to take to heal, and the more longterm damage I was going to do. I realized: perhaps hiking all weekend may not be the best plan. I realized: As much as I wanted to ignore my foot and camp with my friends, this was a very, very bad idea.

So I am not camping right now. In fact, I have returned much of that procured equipment and supplies, because I doubt I’ll be camping any time in the next six months given 1) foot and 2) miserable summer heat. And I’ve stopped using my foot as much as possible, earlier than planned. Depending on how I feel next weekend, I might skip the 5K I’ve signed up for. Or I might just walk it slow in supportive shoes, one of only a few planned easy walks scheduled for the next six weeks. And then I’m going to rest my foot for as long as it takes to get better. Because not-listening-to-my-body certainly hasn’t helped me over the last seven months. And hey, it’s the beginning of miserable hot summer here, so if I need to take a few months off, so be it. Better now than over the winter!!

3 Responses to Sunday Coffee – Camping, Except Not