So much of life right now feels tentatively safe at the moment. It feels like for the last 13-14 months, I’ve been living in an underground shelter, hunkering down and waiting until things are safe again, and now we’re peeking out to see if we can reemerge. The danger is still out there, but my family is as safe as we can get, and if we take reasonable precautions, we’ll be okay. For now, at least. It makes me laugh a little, because I know a lot of folks – including family members – who are Preppers, some with actual literal bunkers, and these are the folks who have refused to stay home, to wear mask, and now to get vaccinated… Like, what was all that Prepping for? Why bother if you refuse to actually take shelter and wait for the danger to pass when it comes?

The J&J vaccine is back on the market now, cleared by the FDA after the clotting issue. Pfizer (and I believe Moderna too) announced that boosters will be available in the fall, to come 6-12 months after initial vaccination (and hopefully any updates for variants). HEB is doing walk-in covid vaccines now, Metro Health is setting up mobile vaccination clinics to get into various neighborhoods, and the city is opening their mass vaccine site to everyone eligible without any appointment necessary. Right now, we’ve got roughly 572k folks fully vaccinated and 840k half-vaxxed in SA. Additionally, we’re up to seven breakthrough covid cases now (cases after full vaccination). All have been mild.

Jason had his second dose this week, with some mild fever and fatigue the day after. His symptoms were less than any of the rest of us. We also had our family memorial this week, which was tough. I had to not argue when I was told things like “I’m not getting the vaccine because it doesn’t prevent spread, it just prevents you from feeling any symptoms.” Sigh. I will be relieved when May 11th comes around and we’re all as immunized as possible. J and I talked to Morrigan as well, to see if he’d managed to get his shots yet, and he said he was planning to do so after mid-May when he moves into the apartment he and his roommate have leased. I’ll feel much better after he gets his doses too!

Generally over the last year-and-a-bit, the focus of these quarantine diaries has been on personal, local, and sometimes statewide happenings related to covid. Very occasionally, I’ll mention something happening on a larger scale. If I’d tried to track the covid-happenings worldwide, I would’ve given up the project ages ago. But right now, the crisis in India is so extreme that I feel the need to mention it here. The spike in cases/deaths is the most steep I’ve seen from any country this whole pandemic, and is even worse than we can tell, as many cases/deaths aren’t being reported because infrastructure, testing, the medical system, and so many other areas/departments are overwhelmed and unable to function. People are literally dying unseen and unattended in the streets. Someone – I’m not sure who to credit – has created a list of charities and folks helping on the ground in India. If anyone has the capability to help, please do.

Even though TX is almost the worst state in the country for percent vaccinated (44th!), San Antonio is still doing okay. We currently have 928k folks who have received their first dose (61.6%) and 647k fully vaxxed (43%). That number should continue to improve as 1) doses are now being administered to jail inmates (you might recall we’ve had several MAJOR outbreaks at the jail) and 2) the FDA is set to approve the Pfizer vaccine for the 12-15 age group next week. Current predictions are that they’ll be approve for under-11 by fall (some reports say ages 2-11, some say 6mo-11). I hope that happens because then my nephews can get their doses! There isn’t a lot of news beyond that this week, except that it was election week here and our current mayor handily won his reelection bid. (Whew!) 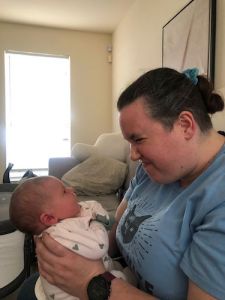 As for at home, my boys hit their two-weeks-post-vax on Wednesday, so they are now as protected as currently possible. Laurence and I went to the school for the high school play last weekend, and I was surprised (and pleased) that all the actors wore masks the entire time, managing to project their voices and enunciate well even through cloth! Laurence later had to go into the school for end-of-credit testing (because it’s TX, and yeah standardized testing is the most important thing in the world, eye-roll), and he felt a lot better about that since he’d had his vaccines. Ambrose is set to house-sit for my sister in Dallas in a few weeks, and will be flying up there – another thing we wouldn’t have even considered before his shots! Then there was the morning I spent at fellow-hiker Lindsay’s house, helping to take care of her newborn (above pic) while she’s in the hospital for complications – everyone in the house was vaccinated, so none of us had to wear masks, and that’s just so…old and new at the same time.

Moving forward
Unless we start getting a lot of crazy news, I’ll be posting these Quarantine Diaries a little further apart again. It really does feel like things are holding steady in our local area, the negatives and positives in a precarious balance atm. I’m sure with the variants running around the world, we’ll see another wave at some point. But for now, things feel relatively stable(ish). I’m afraid to say it and jinx it!