There you go. Texas is about to become a virus hotbed in the next month or two. Rather than continue to hunker down as we get vaccinations distributed, we’re going to make sure another 50K Texans die. Excellent plan, Abbott. See Week 51 below for details if you haven’t heard The News by now.

Week 50 – February 19 to 25
194,736 cases, 2,514 deaths, 7.5% positivity rate (down 2.2%). Hospitals are down to under 500 patients, hurrah! Our local high school only reported 3 student cases this week. Things really do seem to be improving, even if our numbers are still skewed by the city’s shutdown over last week. Speaking of which: Testing was limited last week due to the Snowpocalypse, and went from around 60/70k weekly tests (normal) to about 10k. This has affected the case/death numbers and reporting, and the city won’t put out a rolling average again until there is a full seven days of data. Additionally, the positivity rate was calculated based on the last 2 weeks due to the low testing.

So yes, there is some good news. Hospital numbers have decreased so much that the occupancy levels at certain businesses can increase to 75% again. They were brought down to 50% in mid- to late-December because of our skyrocketing hospital admissions. But with every bit of good news, there’s always that one dummy – and in this case, that dummy is our governor, who told reporters this week that he’s thinking it’s nearly time to end the statewide mask mandate. Even though only 5% of Texans are vaccinated. Even though our numbers are still incredibly high throughout the state, with the only “dip” we’re seeing due to the snow and freezing temps shutting the entire state down for a week or more! I’m glad San Antonio at least has the order that people must wear masks inside businesses, and businesses must require masks to stay open and keep their occupancy certificate!

Another bit of good news: My sister and brother-in-law got their first vaccines this week! Neither of them qualify under the current levels the state is at, but they got on a list for leftover vaccine doses at a nearby pharmacy. One day, they got a call, and both rushed over. Hurrah!

Week 51 – February 26 to March 4
197,497 cases, 2,678 deaths, 329 seven-day rolling average (last reported average, in week 48, was 890!!), 5.6% positivity rate (down 1.9%). With 50K tests taken last week, the positivity rate and rolling average are up to date, which is really good news. Hospitals are also showing good improvement, getting almost down to 350, the lowest it’s been since early November. Also, we had absolutely no cases reported at our local high school this week for the very first time since schools opened to in-person classes back in September. All this is really great news, but it’s not going to last. Because:

For Texas Independence Day on March 2nd – and no, I’ve never even heard of this “holiday” before – Abbott announced that starting on March 10, the statewide mask mandate will no longer be in place, and all businesses – including bars – no longer have any occupancy limits on them. In other words, Texas became the newest contestant in the Hunger Games. Nothing else really matters this week. Yeah, San Antonio moved from “moderate” to “mild” risk, and the Johnson & Johnson vaccine was approved, and TX is letting all teaching/daycare staff get the vaccines now. But give it a couple weeks, and the cases will be skyrocketing again, and we’ll be rolling in refrigerated morgue trucks soon after that. I swear, if this a$$hole governor gets my husband or kids killed because of his recklessness, I will sue the state of Texas. THIS IS NOT OKAY. And it makes no sense, either. Back in May, he removed local authority to require masks when TX was averaging 5k daily cases, only to have cases skyrocket just like the health authorities predicted. Now, TX is averaging over 7k daily cases, and it’s only that low because all the testing centers were shut down for over a week! I predict that we’ll hit 100,000 deaths in Texas by the end of June if this order goes through. Which looks highly probable.

Per this new order, the city is no longer allowed to have its mask mandate in businesses, so that one safety line is gone. Our school district has said it’ll wait for guidance from the TEA, as if the TEA has ever been concerned with safety during this pandemic – glad my kid is still schooling from home! 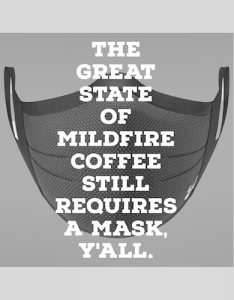 HEB has said it’s too hard to enforce a mandate in their stores if the governor won’t enforce it statewide, so it’ll require masks for employees and “strongly recommend” them for customers. Businesses have started drawing their lines in the sand, and as much as possible, I’ll be sticking with those siding with safety. –>

And definitely, my family will NOT be going anywhere. Even less than before. No stores, all curbside pickup, and if someone needs to go inside a store, that will be me, because I’m the only one vaccinated. Even then, I’m frickin’ pissed because already this week I spent time in Target and Lowes, and there were people defying the mask order even before the announcement. They say the mask is an IQ test, but it’s not, it’s an a$$hole test. Spot the a$$hole. It’s easy. A toddler could do it.

My dad, as a professor, got his first vaccine this week. Hopefully my sister and brother-in-law will be able to do the same, but they’re up in Dallas and I don’t know how the city is applying the rules there. My cousin managed to get an end-of-day vaccine at the UT Health Center. I’m going to see if I can get Jason and the boys onto a pharmacy leftover-shot list, and Jason is set to volunteer at a vaccination site (as volunteers used to get leftover vaccines, so we’ll see?). This is insane.

Moving forward
Time to prepare for the absolute worst lockdown ever. And for more emergency alerts, and the death toll going up, and people shooting each other over masks again, and…