The Shadows, by Alex North 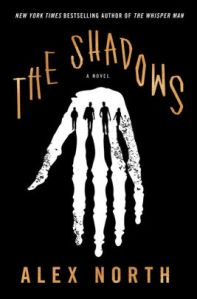 Paul hasn’t been back to his hometown since he left for college 25 years ago. It was too difficult after the murder – a murder he was initially accused of committing – and the disappearance of another boy, Charlie. Charlie had once been Paul’s friend, but he was domineering, malicious, and power-hungry; obsessed with lucid dreams, shared dreams, and a fantasy dream-world led by a monster with a black shadow for a face and blood red hands. Now, there have been copycat murders, people hoping to “follow in Charlie’s footsteps,” but Paul knows nothing about this. He only knows that his mother is in hospice care and he must return home, bad memories or no. But the past can’t stay buried, and this tangled past of dreams and fantasies and murder is ready to sweep Paul under the moment he arrives.

This is my July Book of the Month selection. It’s funny, because I’ve kept an eye on BotM for the last few years, and have never really had an interest in their monthly selections. I signed up in June purely to get my hands on Home Before Dark, and figured I wouldn’t want to continue afterwards. Then July’s selections came, and several of them sounded really interesting. Considering that right now, I’m extremely book-oriented toward mystery, crime, and the (at least vaguely) supernatural, this sounded perfect for me. And it really was!

The description I saw prior to reading the book stated nothing about lucid dreaming or shared dreams. Honestly, if I’d known that this was a major thematic element of the book, I would have been even more excited. I’ve been fascinated by dreams, REM sleep, and all kinds of paranormal dream stuff since I was a preteen. When I was 15, I thought I’d base my career on studying the science of sleep, which even 25 years later is still highly understudied. Maybe my young self anticipated my future self’s troubles with severe insomnia disorders, eh? But beyond the science, I was interested in lucid dreaming, dream projections, shared dreams, etc. Not as a science, just as an interest. I used to play games with friends where we would try to “send each other dreams.” It was similar to playing on a Ouija board (something my sister and I did as well). And while I can’t say I believe in any of that stuff as an adult – or at least, not that it’s paranormal, because I think the subconscious can influence a lot of what a person dreams about and also remembers from their dreams – I still love reading stories about it. In other words, this book was right up my alley!

Mystery, with a touch of thriller, and a touch of the supernatural. Atmospheric. Dual narratives from the past and the present, and dual narrators of Paul and a detective who happens to share my name! It was a fascinating look into how a strong personality can pull others their orbit, the way a cult leader can gather a following. Charlie’s twisted personality went well beyond interest in the paranormal aspects of dreaming. He was a master manipulator, and remained so for a quarter century after disappearing. I think we’ve all come across a nasty personality like that, been tainted by it in a way that allows that person to haunt us well into adulthood, long after they’ve disappeared from our lives and have probably long forgotten us as well. This is a story of the things that make deep impressions on us in a formative time of our lives, and the way those impressions steer us onto the paths we take.

So there was a lot to think about, while also just being a really good creepy mystery. I will admit, I was blindsided at one point in this book so completely that I had to stop and go back and reread a bunch of things. It’s very rare for me to be blindsided like that in a book, and I imagine some readers would see everything clearly in a way I didn’t. It was quite cleverly done, and a treat for me!

I will definitely be going back to read The Whisper Man by North. The detective, Amanda, is featured there as well, and the case in that book is hinted at mildly in this story. Unrelated, but same setting, some of the same characters. It’ll make a perfect RIP book, as would this one if I’d waited to read it in Sept/Oct. I highly recommend it going on to some of y’all’s RIP lists! It’s a doozy.

Agender empty-nester filling my time with cats, books, fitness, and photography. She/they.
View all posts by Amanda →
This entry was posted in 2020, Adult, Prose and tagged atmospheric, RIP-worthy, WTF moments. Bookmark the permalink.

1 Response to The Shadows, by Alex North