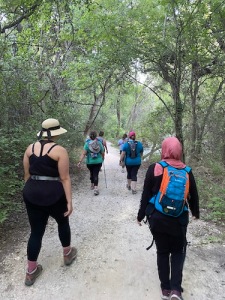 This month has been a rollercoaster and an exercise in frustration. At the beginning of the month, my calendar was nearly as full as it would have been pre-quarantine. I had nearly a dozen hikes scheduled (all with six or fewer hikers, because safety), and we’d scheduled quite a few medical appointments that we’d had to put off re: covid. Additionally, there were multiple virtual and physically-distanced family/friend visits planned, and a few surprise Zoom appointments. But by mid-month, suddenly all the events and appointments began to drop off. After the 19th, literally only the marking of Father’s Day remained on my calendar. It’s frustrating, because it was soooooo good to see people again, even if we all had to keep our distance and wear masks. But apparently we can’t have nice things here, because somehow masks have become a political debate, and due to this idiocy, we now have a covid-situation that is worse than it’s ever been. I really hope that soon San Antonio can get this thing under control because BALANCE is good and we’ve got to figure out a way to live with this virus until we have a better solution!

Meanwhile, in the last few days of the month, the family had to split up, with Jason and Morrigan staying in San Antonio for work and the cats, while I took my two younger children up to live with their grandparents for awhile in a rural area of WI to minimize our exposure to covid. Morrigan got sick and had to be tested (came back negative, but we’re told that there’s a 1 in 5 chance of a false negative, ugh), so now I’m up north and quarantined for the family’s safety and worried about my husband and child down in the San Antonio hotbed that we’re told is on a trajectory WORSE than Italy was at one point.

Once again, not the greatest month for books and movies. I did see the newest Addams Family movie, which was cute. And I read two books: Home Before Dark (loved!) and Little Eyes (got me thinking a lot, but not sure I actually liked it). However, I just had nearly ten books arrive for me from the library, most digitally, so I might actually read something now!

Goals
Very little progress on my yearly goals this month. I tried to keep up with running, but the mornings are 80 degrees at sunrise with 90+ percent humidity; the evenings are 95 degrees with heat indexes over 100 (plus my body feels better exercising in the mornings); and I don’t have a treadmill at home. I debated between getting a treadmill and getting a gym membership, eventually deciding on the latter. Then I despised the treadmill running, and COVID got so bad that I had to stop going to the gym anyway. Maybe running will go a bit better in July given the better Wisconsin weather!

As for my 20-20 in 2020 goals, I did barely squeak by in June, with the holdout being the phone-off-by-9pm goal. That one is hard! Once again, I was doing well until covid-anxiety began to creep up again. But I made it, and get to pick a reward for the first time since February! My summer break quarantine goals are going pretty well, with seven (and three partials) out of eighteen. However, this temporarily relocation to Wisconsin will mean there are several goals on the list (like landscaping part of my front yard) that aren’t going to get done! That’s okay – covid safety takes precedence!

Health
I talked above about the whole running thing, which is a big part of my health/fitness. Otherwise in exercise, group hikes began again this month, and I managed to attend six of them before we had to cancel them again due to the Virus. Altogether, I managed 21 days of exercise, for 17:48 hours total, including 9 yoga, 6 strength training, and 39.4 miles for June. 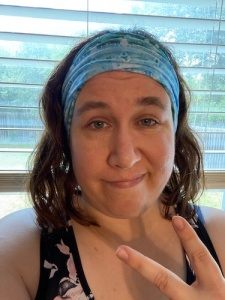 Outside of exercise, my health hasn’t always been good this month. Anxiety is high. I had my second-ever kidney stone, which is no fun, but at least this time I didn’t have to go to the ER like in 2016 (thanks for the tip, Gricel!). I’ve had a lot more insomnia, and that’s probably tied in to drinking even more coffee than usual. My stomach has hurt a lot since mid-May when I quit eating gluten-free, but I haven’t been able to convert back to a GF diet despite this because options are so limited and I don’t have the mental energy left to deal with that. With the increased yoga I’ve been doing, my cyst in my left wrist has started to reemerge – no fun!! In better news, I signed up for a personal coaching program through Girls Gone Strong. It only began this past weekend, so I don’t know yet how it’s going to go, but after trying to handle this myself for six years (and with absolutely NO help from doctors), I need guidance from someone smarter than me. Fingers crossed that through this program, I can see results and perhaps figure out what’s wrong.

Things that worried me

Number one on this list: the gigantic covid spike. We had a total of 9235 new cases in June. That’s 77% of our total 12065 cases since March 13th – literally we ended May with 2830 cases and went up to 12065, y’all. Oy. Hospitalizations, critical care, ventilator usage…all up. All going the exact wrong way instead of keeping our curve nice and flat like before. Then there were the other things to worry about: Gavroche had surgery on his mouth this month. Ash began to get jaundiced again. Laurence had outpatient surgery on his toe that he’s still recovering from. I had to deal with that kidney stone. Morrigan is working in fast food where customers are still being belligerent about masks, and eventually got sick, currently quarantined and unable to work for at least two weeks (if he ever returns!). Three of us traveled cross-country and are separated from the rest of the family, which as I’ve said is both a relief and a worry in multiple ways.

Highlights of June
It was a serious roller-coaster month, with some really wonderful moments and some really low points as well. Here are the highlights.

Coming up in July
It’s another high-birthday month in my family – my mom, stepdad, half-sister, and middle son all have birthdays in July. It’s going to be really weird to have all these birthdays with no way to get together. Boo! Ambrose will be turning 18 this month, just in time for voting come November! And of course, part of my family will likely spend the entire month in Wisconsin (end-date is currently unplanned). Plus: the new Unsolved Mysteries releases in July!!! (Yes, I’m super excited for this!)