Let me just start by saying that January began on a wild, explosive note. I actually stayed up to midnight on NYE this year, and just a few minutes before the ball dropped, a sudden and excruciatingly strong migraine hit out of the blue. I don’t get migraines often, and this felt very similar to the pinched nerve I had after my abdominal surgery in January 2014. Every fiber of my body hurt, I was nauseous and dizzy, and I couldn’t see properly. The boys were off with Grandma, so Jason helped me get water, medication, massage, anything that might help. I’d had bad headaches off and on for a few days that I figured were related to my upper respiratory infection and medications. Maybe they were a prelude to this, though? Who knows! In any case, we missed the actual ball drop, and suddenly fireworks were all around us, and my Lunesta put me asleep pretty quickly. I woke up with no lingering effects. It was just so weird. 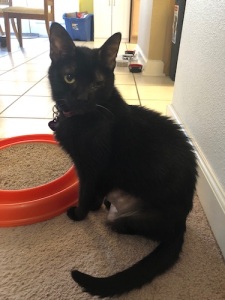 That was the note that began the rollercoaster of the first week of January. There were high notes – starting C25K with Jason, hikes with my meetup group, some late-arriving Christmas presents that I adore, etc – and low notes – most notably, my kitty Ash getting very, very sick. He’s ten years old, and I wasn’t expecting the vet to say words like “severe liver failure” and “discuss quality of life.” However, he began to improve after an antibiotic shot, and while we know he may not have much time left if the abnormalities they found were cancer, we were happy not to have to say a very sudden goodbye.

As you might imagine, I was quite overwhelmed and distracted this month. It wasn’t all bad, but it was quite intense, and not exactly what we were expecting from the month. It was an exercise in trying to stay afloat and not succumb to the pressure.

I read two really wonderful books this month: There Will Come a Darkness and The First Girl Child. Both really struck chords with me and are likely going to be in contention for best of the year, so that’s a really great way to start 2020’s reading list! Beyond those, I read an additional four books in January, including two rereads and one book that was on my top three most anticipated for the year. Other than one dud, I’m quite happy with my books this month.

In film, I started the month with a girls’ day out to watch Little Women, which was awesome. Might even be my favorite adaptation to date, and I’ve seen a lot of them! Otherwise, I didn’t watch much this month beyond old crime show reruns when I was feeling anxious. I’m super excited for an upcoming movie event in February that I managed to snag tickets for – a pajama and cereal-buffet movie screening of Howl’s Moving Castle. Woohoo!

A lot of my goals for the year were put on hold this month. Priority went toward caring for Ash, who is definitely not out of the woods yet. Because I had a lot of anxiety and felt quite overwhelmed and worried, I decided to hold off on some of my year’s goals (writing, volunteering at the library, etc) until the situation at home is a little easier. I did work as hard as I could at my fitness goals, though, with special focus on running, keeping all screens off after 9pm, and continuing to fight anxiety-induced agoraphobia by getting out of my house whenever I could. Not always perfect and not everything I wanted to do in January, but some progress is better than none. Also, I’m happy to report that Month 1 of my 20-20 Challenge went well, at least in terms of completing all my mini-goals. This means I get to pick a reward! Haven’t yet decided which one.

I would say that my health was fairly neutral in January. On the plus side: 2o days of exercise (17 hours total); 14 yoga; 33 miles; completed the first two weeks of C25K; increased fruit and veggie intake; consistently drank enough water; got blood tests that showed all my health numbers are doing well (and that in fact my hormone levels are improved so much that my PCOS specialist said I didn’t need to get retested for a year). On the down side: severe anxiety with panic attacks (worse than it’s been in some time); too much coffee; missed several events due to mental health issues; no weight loss; been lax on both magnesium supplements and foam rolling; lots of bone pain especially in my feet; and the appearance of a ganglion cyst on my left wrist that will likely need to be surgically removed.

The most notable thing that happened in health this month was that I got a doctor to listen to me about the mounting symptoms I’ve been having the last few years. There have been too many times in my life where one tiny problem in my body caused widespread, seemingly-unrelated symptoms. Doctors tend to treat the symptoms rather than look for the cause. I have suspicions about the cause and finally someone listened. More labs and an ultrasound have been ordered. Fingers crossed that I have some answers soon!!

Highlights of January
As I said, it has been a rollercoaster month! Lots of highs and lows. Here are a few of the highs not related already above.

Coming up in February
It’s going to be a busy month. My nephew turns six, my cousin is getting married, we’re supposed to close on our house, we’ll be doing our taxes, and I’m currently scheduled for five hikes with my hiking group in the first half of the month alone, plus a 5K later in the month. I’ll also find out if I need wrist surgery this month, and get a few more medical tests/results. Plus it’s my last month at 40 years old, as my birthday is March 1st. With all this going on, I just hope that I don’t end up completely overwhelmed again!!