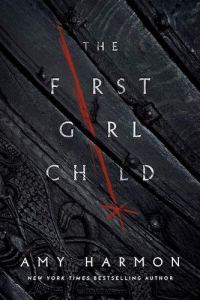 From Goodreads: Bayr of Saylok, bastard son of a powerful and jealous chieftain, is haunted by the curse once leveled by his dying mother. Bartered, abandoned, and rarely loved, she plagued the land with her words: From this day forward, there will be no daughters in Saylok. Raised among the Keepers at Temple Hill, Bayr is gifted with inhuman strength. But he’s also blessed with an all-too-human heart that beats with one purpose: to protect Alba, the first girl child born in nearly two decades and the salvation for a country at risk. Now the fate of Saylok lies with Alba and Bayr, whose bond grows deeper with every whisper of coming chaos. Charged with battling the enemies of their people, both within and without, Bayr is fueled further by the love of a girl who has defied the scourge of Saylok. What Bayr and Alba don’t know is that they each threaten the king, a greedy man who built his throne on lies, murder, and betrayal. There is only one way to defend their land from the corruption that has overtaken it. By breaking the curse, they could defeat the king…but they could also destroy themselves.

[Note on this description: Alba is born seven years after the curse begins. I’m not sure why the description says “nearly two decades.” The curse certain continues afterwards, and goes on for more than two decades, but Alba is alive during most of that time…]

I want to start by expressing that I don’t think I can do this book justice in my review. It was so good and I loved it so much that it’s difficult to write about it with any clarity. I got the book on a whim from Audible when it came up as a daily deal in mid-January. No one I knew had read it, and I’d seen no reviews or interest in it. It sounded interesting, though, so I took a chance. And I’m SO glad I did. This book is the second book I’ve read in January that is amazing all the way through. It’s a slow, carefully-executed fantasy novel built on Norse mythology and blood-rune magic. On this backdrop, a kingdom is suffering from an excess of men due to the above-named curse. Because of this, there are lies, secrets, raids, skirmishes with neighboring kingdoms, threat of sexual violence*, and lots of pointing fingers. As chaos pushes Saylok to the breaking point, individual relationships grow and flourish: familial, romantic, spiritual, protectorate, etc. The writing, from opening chapters to conclusion, is gorgeous. A wonderful blend of mythology, magic, and the consequences of greed and desperation.

The audio production is equally beautiful. The First Girl Child is read by Rob Shapiro. It’s my first experience with his narration and I’m totally hooked. He has one of those resonant, calming voices that matched the atmosphere of this book perfectly. I imagine I would have loved the book just as much in print, but I’m happy to have experienced it via audio.

*****
*No sexual violence is described in detail.

1 Response to The First Girl Child, by Amy Harmon (audio)