Back in late December, I was getting dressed for bed when I noticed a round, red patch on my thigh. It was so regular that I thought at first that it might be ringworm. I wasn’t sure how I’d come in contact with ringworm and suspected that I needed to check over the cats. I put some medicine on it and dismissed it from my mind.

The next day, the red patch was gone. That evening, multiple red patches appeared on my legs and abdomen. I realized this was not ringworm but hives.

That was late December. I thought I’d identified the culprit – the probiotic I was taking, because the hives always appeared within 15 minutes of taking it in the evening. I got off the probiotic (which caused problems since it was no longer countering my antibiotic), but the hives didn’t go away. They weren’t as bad as they were with the probiotic (I did multiple experiments over the last six weeks) but they kept coming back in varying degrees every night. Additionally, I had a regular facial rash under my skin, so that my face was itchy and raw and inflamed but only on the inside. I couldn’t scratch it. It was so difficult to get a good picture and the one I posted before didn’t really show the damage. 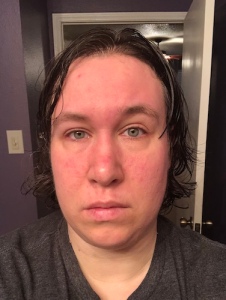 I finally got one that showed the rash well. This photo is from Tuesday morning after a cool shower (because even a warm shower made all the hives and rash come out). Needless to say, this was awful.

In the past, whenever I’ve come in contact with something I’m allergic to and I get hives, they don’t go away until I’ve had a round of steroids. I avoided this as long as I could this time. I got off all medications and supplements. I looked for patterns. I took antihistamines, hoping to decrease the inflammation that way. Nope. Every night, the hives returned. Finally, I had my follow-up with my doctor on Thursday, he gave me a steroid six-day tapering pack. I took the first day that evening. (Also, if you’ve never taken these things, they are the worst-tasting medicine on the planet. I literally have to nestle them into a bite of food that I can swallow straight in order to keep the pill from touching any part of my mouth or throat. It’s TERRIBLE.)

That first night, I slept better than I have in months. I woke up full of energy. Not only did I feel like exercising, but even after I exercised, I was on the go all day. I remember what it felt like to not be crushed down with unspecific fatigue! And it wasn’t just the full night of sleep – every part of my body felt lighter and freer. My bones and joints didn’t ache. I went from feeling bodily-elderly to bodily-young. Better yet, I only had one (mild) hive that day and no facial rash! The second night, I slept horribly (this is more common with steroids). However, despite the lack of sleep, I did really well during the day. My yoga didn’t completely sap me the way it’s been doing for weeks now. I had energy all the way up until bedtime. Other things to note: Starting the second day, my facial skin looked healthy for the first time in months, if not years. (Seriously – rosy and glowing rather than either inflamed or sallow – I didn’t even know I could look like this anymore!) I got no hives at all after that first day. My non-exercise activity level doubled and I suddenly had no trouble hitting my daily step count goals. I also dropped several pounds. Woohoo!

I still don’t know what exactly caused all the inflammation in the first place, but I really hope that now that it’s under control, I can keep it that way without having to resort to medication. And I’m so thankful that medicine like this exists. I hate having to take steroids but I’m so grateful for the way they help.

ETA: Oh seriously…an hour after I posted this, I suddenly got full-body hives and rashes. &*!##%@$. I’m supposed to get allergy tests soon, but MAN this is frustrating!