Since we’re now halfway through the year, I thought I’d do a quick halfway point check-in. I’m going to skip the rougher parts (those can be seen in individual month check-ins) and focus instead on my best-ofs for the year.

Movies
I’ve seen a lot more movies than normal this year – more on that next week – and my favorite by far has been The Greatest Showman. I’ve been obsessed with that movie and soundtrack for the last month or two. I wish I’d seen it in theatre. It’s odd, because I don’t normally like musicals at all! This one just hit all the right buttons for me. Runner-up was hard to pick because I’ve seen a lot of good ones this year. I recently finally got to watch Coco, and that actually brought some tears to my eyes (hard to do for me). I’m tentatively calling that as my runner-up for the first half of 2018.

Books
As you know, I’ve barely read a thing this year. Only 23 in the first half of the year, and of those 23, only a small handful stand out as wonderful. One, however, stands out far above the rest. Eleanor Oliphant is Completely Fine was by far my favorite book of 2018 so far. Choosing a runner-up was more difficult, because I really did read some phenomenal books in there. It seems my memory is doing that silly thing where books go in and go right back out, though, so I’m choosing my runner-up based on being a book I loved and that actually stuck with me all these months later: Consider the Fork.

Discoveries
I think there’s no denying that my favorite new thing of the year is LuLaRoe. I mean, that wasn’t the most obvious thing in the world, was it?

Highlights
Despite the rough, there’s been a great number of wonderful moments so far in 2018. My oldest son finished driver’s ed, scored amazing on his SAT, and was one of six kids in the city chosen to represent San Antonio on the trip to Japan this summer (he leaves in just a few days!). My middle son also finished driver’s ed, got inducted into the National Art Honor Society, and is spending the summer basically apprenticing (for money) under our contractor friend, since he (my son) wants to do construction or cabinetry as a career. My youngest was in the school play and is now taking an optional summer school class in theatre so that he can start more advanced when he begins high school in August. Jason is doing very well at work, getting more and more responsibility, and is highly valued (unlike when he was at his previous company, which dropped him for no reason about this time last year). I’ve had some personal breakthroughs with regards to my health, and while I’m not doing anywhere near as well as I’d like, I’m doing better than I expected. Plus I’ve gotten to catch up with several friends this year that I hadn’t seen in years! 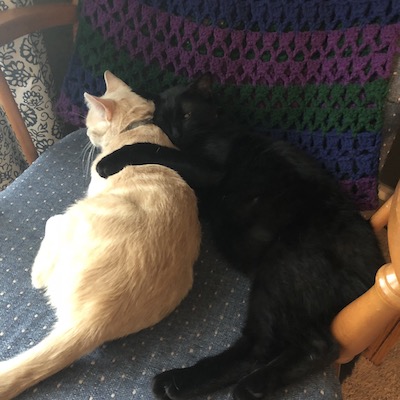 Additionally, our family (accidentally) adopted two rescue cats this year, saving both of their lives, and they became a bonded pair. Financially, while we may be struggling now as the insurance argues over who’s responsible for this current damage, we’re doing much better than we started the year, now that our Wisconsin house is off our hands and we (at one point) had our massive credit card bill paid off. I’m sure we’ll get there again after all this insurance stuff goes through. Jason has booked us on a cruise for September, which I’m really looking forward to, and we’ve almost finished xeriscaping our front yard (stalled when the indoor work began!).

Sometimes it’s hard to see all the progress we’ve made in our lives this year, with all the negative hanging over our heads, but we’ve really done a fantastic job moving forward in 2018. Now we just need to get over the hump of the summer and back to making this a really incredible year!