Wellness Wednesday – The Problem With Moving

So there are all sorts of problems with moving, honestly, especially when you move across the country four times in three years. But one of the big ones is this: your body no longer knows how to react to the various pollen and allergens of your once-native land.

San Antonio is awful for allergies. There isn’t a day when some allergy or another isn’t super high, and there are big chunks of the year where it’s nearly impossible to stay healthy even if you aren’t allergic to the particular pollen that’s in the air. The concentrations in the air are so high that everyone reacts. December through April are particularly bad for this, with mountain cedar, mold, ragweed, and oak. Right now, it’s oak season, three weeks or so when everything outside turns yellow-green (particularly evident on cars!). I have a mild allergy to oak, so this is the worst season for me. Over the years, I’ve often had oak allergies turn into bronchitis in late March/early April. Sometimes more than once in the same year.

And this year? Oak is killer. You drive down the street and see tree after tree that are bright yellow. It looks like autumn outside. Pollen counts are through the roof, breaking all kinds of records. Apparently that’s what happens when we have a mild, wet winter – the trees over-pollinate. And if you’ll recall, I talked at length about our ridiculously rainy February that made it difficult to go outside to walk and exercise. That means that this month, oak is out to kill me. 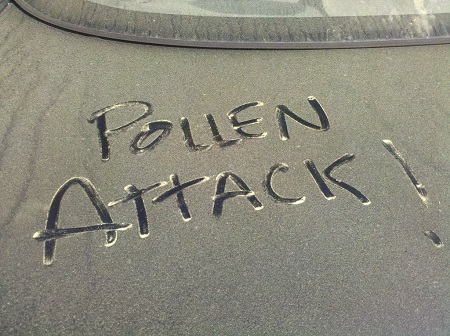 Not just oak, either. I’ve actually had allergy symptoms devolve into bronchitis four times since the start of 2018. My body is not used to these allergens anymore! Two of those bouts of bronchitis have been this month, this last one bad enough to send me to urgent care last Sunday to get some antibiotics. I’m not generally prone to illness, but MAN I’ve been sickly this year and I’m fed up with that! Unfortunately, good nutrition and healthy living can only take you so far when your body has dealt with four changes in pollen-patterns in the last few years. Let’s just hope I can get out of the worst part of this season alive and that next year I’ll have adjusted better!

Writing. Family. Books. Crochet. Fitness. Fashion. Fun. Not necessarily in that order. Note: agender (she/her).
View all posts by Amanda →
This entry was posted in Wellness and tagged Wellness Wednesday. Bookmark the permalink.

6 Responses to Wellness Wednesday – The Problem With Moving