Sunday Coffee – Looking Ahead to 2018 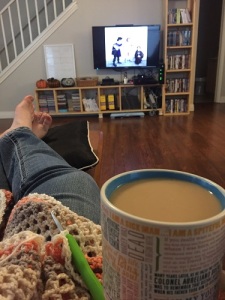 I know, it’s a bit early to start looking ahead to the next year. I guess there’s some part of me that has already left 2017 behind. I’ve started writing my dates with /18 at the end already. It’s not that 2017 was a particularly bad year. Lots of frustrating and negative things happened, but the eventual changes were good ones. I think it’s those changes that make me anxious to leave the old behind and start anew. The beginning of the year always feels like a new beginning, so it’ll be nice to have the new year to compliment the new house, new job, new routine, etc.

Anyway. For whatever reason, I’m starting to look forward. Making plans and goals. And more to the point here, making reading lists.

Every year, I make a list of the books I want to get to that year. I don’t actually have to read every once of these books – plenty get tried and culled along the way – but it helps me to organize my reading year. It’s the best way for me to keep track of the books that are coming out, and to keep my audio queue and to-investigate lists pared down to minimums. In beginning 2018’s list, I’ve realized that this is going to be a lull year. As of this writing, there are only a half-dozen books being released (that I know about) by authors I love, and of them, only two are ones I know I won’t cull. I’m currently in the process of thinning out my to-investigate list and audio queues, and depending on how far I get in that process this year, I might have less than a dozen titles on my priorities list next year!

Who knows? Maybe that’ll lead to the discovery of lots of fun new stuff. Maybe it’ll be like other lull years and I’ll have a lackluster reading list. Maybe some of you lovely bloggers will clue me in to other books I should be looking at in 2018. Maybe some of the books I’ve been looking forward to but which currently don’t have release dates will release (Lethal White, The Muse of Nightmares, The Lost Metal, the next Shades of London or Dublin Murder Squad books…). Pretty please?

6 Responses to Sunday Coffee – Looking Ahead to 2018