I’ve moved to northern Wisconsin, and I have way too much yarn. It only makes sense that I create tons and tons of winter accessories to wear! Today’s post features scarves, shawls, and cowls that I’ve crocheted over the last few months. 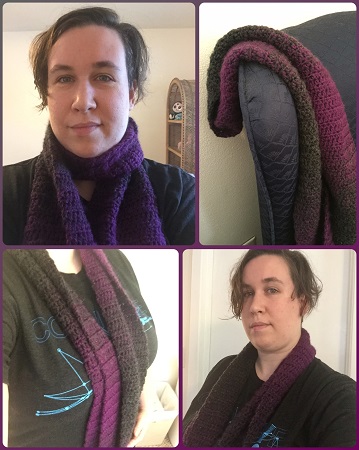 The first scarf I crocheted was extraordinarily simple, just one stitch all the way through. However, the scarf looks amazing because of the yarn I used. This is Lion Brand Scarfie Yarn in charcoal/magenta, and the pattern just came straight from the skein. It was tons of yarn (over 300 yards) and the entire skein was used. The transition from charcoal to purple and back again is perfect, and the yarn is lovely-soft. Despite how simple this is, I know it’s going to be one of my most-used scarves this winter. 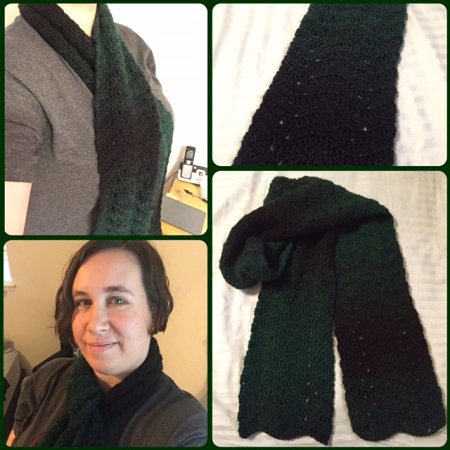 I loved that Scarfie yarn so much that I bought a second skein of it, this time in forest/black. I found a cute chevron scarf pattern at Grow Creative, and got to work! This was the super-satisfactory result! 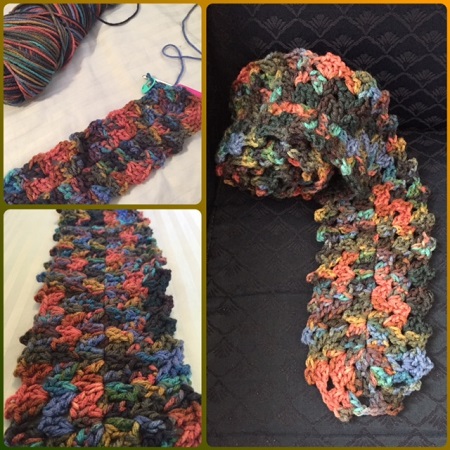 What would moving to Wisconsin be without a fun autumn rainbow scarf for my niece? Pattern from One Skein Wonders, yarn is Red Heart in Earthy. 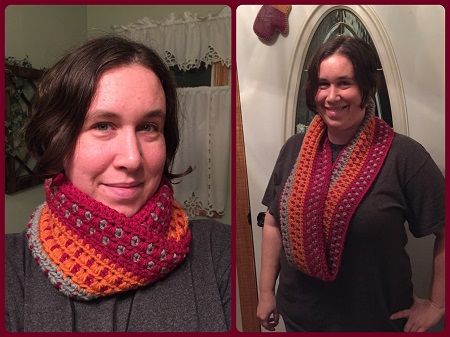 This twisting infinity cowl is a pattern of my own design! Mostly I just had a bunch of chunky yarn lying around, the dregs from other projects, and decided to play. I’m really super happy with the results. The cowl is comfortable, reversible, versatile, and in colors that both feel like fall and remind me of my mother’s favorite flower (Indian Blankets), which is perfect when I’m so far away from home. [Yarn: Lion Brand Woolspun in Cranberry, Pumpkin, and Oxford Grey] 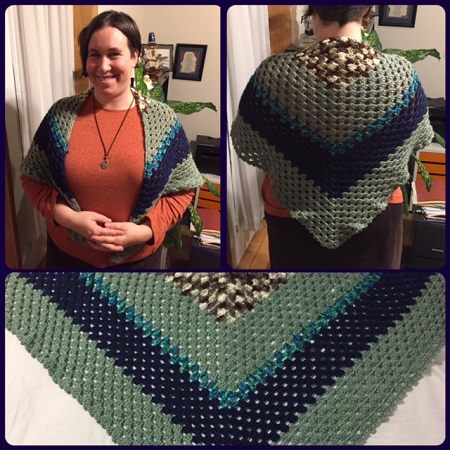 This was another dregs project: the leftovers of many skeins of yarn that I wanted to use up and a pattern for a “Mulberry Shawl” I bought awhile back from The Hook Nook. The pattern was fairly simple, basically a triangle granny square with a scallop edge that I ended up nixing in favor of a picot edge anyway. It turned out really cute with all my dregs, though! Nice and soft, too. [Yarn: Caron Simply Soft in Woodland (Camo), Woodland Heather, Peacock Feather (Paints), and Dark Country Blue] 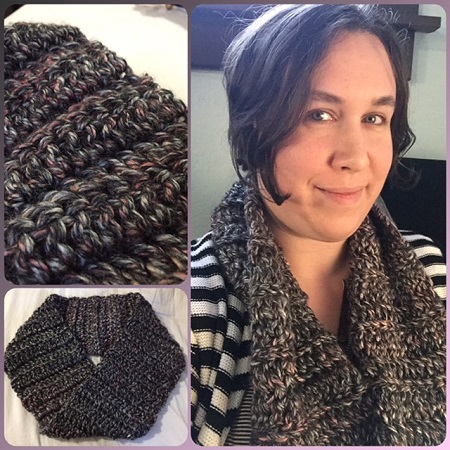 One Skein Wonders had a bulky-yarn pattern for a mobius cowl. Unfortunately, other than the little twist in the infinity cowl, the pattern was kinda boring. So I played. I got a super-bulky yarn that was this beautiful gradient of greys and pink, plus a 10-mm hook, and I modified the pattern a bit. It’s still a simple concept, but I like it much better than what the original calls for. Plus, this was my first time using such a large hook as well as super-bulky yarn. It was a fun experiment! The whole thing took maybe an hour to work up, which was nice! [Yarn: Lion Brand Hometown USA in Salem Creek] 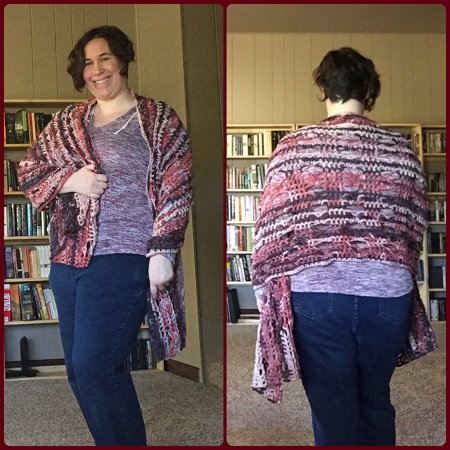 Both shawls I’ve made over the last couple months have been triangular and didn’t give me enough arm coverage, so I decided to make a very large rectangular shawl/wrap. I chose the Hoover Dam Shawl from Expression Fiber Arts, which took a bit over 1000 yards of yarn to crochet. I’m in two minds about the end results. On one hand, I love the pattern and the end-product. On the other, I was very disappointed with the yarn itself. This is my fourth or fifth time trying out Yarn Bee skeins and each of them have been frustrating in some way. This particular yarn had at least 1-2 knotted breaks in each skein. Beyond that, it didn’t work up very well. I could block the entire thing to make it neater, but it’s over six feet long, and considering the yarn is acrylic, I’m just not sure blocking would make much of a difference. So the shawl doesn’t look nearly as professional or smooth as it would with a higher quality yarn, but it’s warm and comfy, so I love it anyway. I just don’t think I’ll pick up Yarn Bee again. [Yarn: Yarn Bee Soft & Sleek in Blushy] 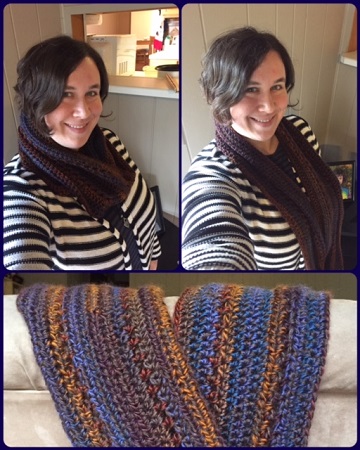 Lastly, I decided to make myself one more twisting infinity cowl/scarf. I’ve long loved the rainbow Landscapes yarn from Lion Brand, but I thought it would be too bright on its own, so I mixed it with some leftover brown yarn for a more muted effect. I absolutely love the way it came out, and the double strand made the scarf thick and super warm. As you can see from the photo, I can wear it as a single loop or doubled, and it appears darker or brighter depending on the light. [Yarn: Lion Brand Landscapes in Mountain Range, Lion Brand Heartland in Sequoia]

I have a lot more of this kind of thing that I’d like to make in the future, but I’m set for the upcoming winter season, and so will turn my brain and fingers to a different kind of project now!

Writing. Family. Books. Crochet. Fitness. Fashion. Fun. Not necessarily in that order. Note: agender (she/her).
View all posts by Amanda →
This entry was posted in Crochet and tagged I made a thing., Yarn Art. Bookmark the permalink.