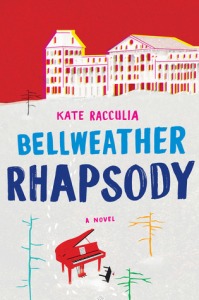 A dilapidated hotel. A November weekend. A pair of elfin-looking twins. A sociopath music director. A missing girl. A volatile conductor. An a cappella boy band. A legendary murder-suicide celebrating its fifteenth anniversary. A blizzard that traps everyone inside.

This book was awesome! I heard about Bellweather Rhapsody from Kristen, who had mixed feelings about the book. I put it on hold at my library, thinking I’d probably read a few pages and send it back. This was especially so after I saw on GoodReads so many mixed reviews, mostly positive, saying the book was interesting and/or weird but didn’t really come together at the end. But you know what? I have absolutely no idea what those GoodReads reviews were talking about! Everything most certainly came together, and in the best ways possible! Yeah, the book was strange, but in a good way. Everyone seems to have a different take on how to describe it, and here’s mine: this was like reading Edward Gorey, if Edward Gorey wrote novels instead of drawing graphic short stories. And personally, I adore Edward Gorey, and I loved the snot out of this book!

The writing was phenomenal. The point of view switched from person to person, section by section.** Every word felt deliberately atmospheric, without feeling like Racculia was trying too hard to get across a particular tone. I’ve read other books that read the same way: Lolita, Dr. Jekyll and Mr. Hyde, Notes on a Scandal, We Have Always Lived in the Castle, etc. Most of them, however, are told from first person POV, and this was third person. That made for an absolutely fascinating dynamic, where the narrator isn’t really a part of the story, but shapes the tone for the entire book.

I love tonal, atmospheric books with brilliant, unique voices. Once again, this book was AWESOME.

I kept waiting for the moment when nothing would come together and I’d be disappointed. And hey, maybe because I was waiting, because I was expecting the book to fall apart, I was pleasantly surprised instead of disappointed. Honestly, though, I don’t think it was just that. Even without the forewarning, I have a feeling I would have loved the snot out of this book no matter what. I want to hug it and read it six more times, and see it on my shelves and smile as I remember all the little details.

Now, I don’t think the book is for everyone, the same way I don’t think Edward Gorey is for everyone. Not everyone likes morbid comedy, and again I saw some reviewers talk about how the funny and the horrifying didn’t really mix. For me – a huge fan of morbid comedy and psychology and mysteries that aren’t really mysteries but are really more emotional puzzles – it all fit together seamlessly. And mixed with all the pop-culture references from the 90s, not to mention music and literature references all throughout (I grew up in a house of professional musicians), this really added up to the Perfect Book For Amanda. And as you can see, I kinda want to become a crusader for this book, shoving it into people’s hands, telling you all THAT IT WOULD BE A PERFECT SELECTION FOR WHEN RIP*** STARTS THIS SEPTEMBER, and…well, you see. It’s lovely. Please read.

**Except one bizarre section that switched twice in about a page, the only time in the book to do this, and which really annoyed me because I hate when things are out of place, though at the same time, it made my brain start traveling down other avenues of thought, questioning identities of certain characters, and while I wasn’t questioning the identities of the right characters, my thoughts had led me in the right direction for a later twist, which was very satisfying!

***Ooh, maybe I’ll see if there’s an audiobook version available to listen to for RIP! I’ll bet this could be awesome on audio, if it’s done right.