North (aka Lake Superior)
As I mentioned in my last vacation post, we took two mini-vacations while on vacation (ha!). The first was to visit my sister-in-law, Chelsea, who is a paramedic in Duluth, MN. Duluth is only a couple hours north of Barron, so it’s not too bad of a drive.

Lake Superior is gorgeous. This was my second trip to Duluth, but the last time, it was all foggy and muggy. On this trip, it was clear and beautiful out while we walked along the shore, spent some time in an antique shop, indulged in ice cream, and eventually went to dinner at a local brewhouse.

The next day, we drove even further north to Gooseberry Falls National Park. It was a day of hiking, picnicking, and eventually settling on the shore of Lake Superior once again. The boys, Jason, and Chelsea all braved the water (I got a video of them screaming as they ran into freezing cold), and later we buried Chelsea in pebbles. I only put my feet in and that was cold enough!! 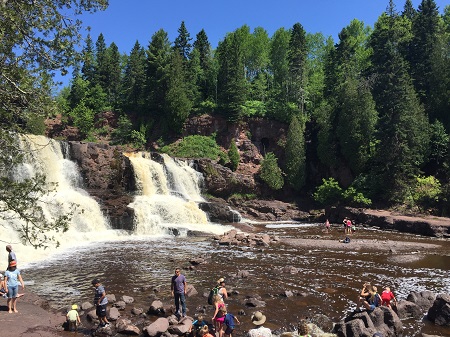 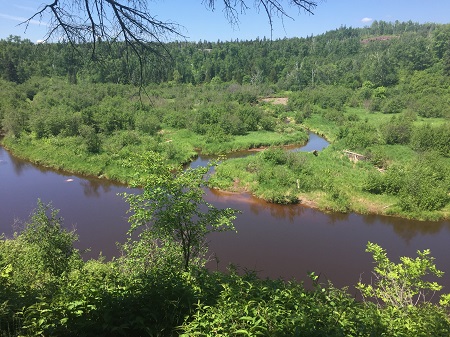 It was a great little mini-trip in the first week of our vacation.

South (aka Wisconsin Dells, or the water park capitol of the USA)
So I have to say, our second mini-trip started out a little rough. First, there was the rain plaguing the three-hour trip southwards. Then we discovered that all four windows in our family suite hotel room leaked. Then there was a domestic violence disturbance across the hallway that Jason had to referee. Then the hotel chain tried to put us in two rooms with two beds (we originally had three beds and two sets of bunks) in a worse building much further away. Then eventually they gave us the right number of beds but in two hotel rooms across the hall from each other, and in one of them, the toilet didn’t work. Then they screwed up the credit card refund. Sigh. By the time we all got settled in, the water park was closed for the evening.

Thankfully, day two of our trip went much better. There were ten of us altogether, and we got to the park super early, which meant we got prime real estate (the best table/chairs under the shade all day). The four kids all took off into the water despite it still being in the 60s out. The adults decided to wait. In fact, while we all got in at least once, most of the adults took turns hanging out at our claimed table and just talking and relaxing for the eight hours we were there. (Somehow, I got mildly sunburned, despite tons of sunscreen and being in the shade 95% of the time, grr.)

We went to Pizza Ranch afterwards (mmm) and then had the super long drive back to Barron in the dark. Only really, only the last part of the drive was dark, because in Wisconsin, it gets dark at 10 in the summer! (I’m used to the 8pm time in south Texas.)

Sadly, I didn’t get a single picture from our trip to the Dells. Boo. So all those pictures from Duluth will just have to make do for this post.

Writing. Family. Books. Crochet. Fitness. Fashion. Fun. Not necessarily in that order. Note: agender (she/her).
View all posts by Amanda →
This entry was posted in Personal and tagged travel. Bookmark the permalink.