Sunday Coffee – All the Books 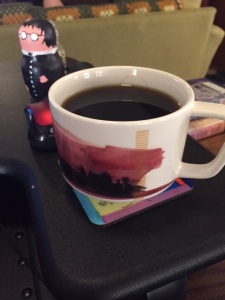 April was a crazy month for me in books. Most months, I read anywhere from four to six books. In April? I read twelve. And that doesn’t include the three re-listens to the early Raven Cycle books leading up to the Raven King, or the multiple reads through the Raven King itself. Readathon made up nearly half of that total, of course, but mostly, this was a continuance of the sudden switch I had near the end of March where I moved from multi-reads to new material. I wanted to Read All The Books this month, and so I did. I imagine this will continue for awhile.

The month was great for writing, too, though now that I’ve finished my manuscript, I’m floundering a bit. I have no new project in front of me but my brain is yelling GO GO GO, so it’s like a car with spinning wheels and no traction. It’ll resolve itself in the next month, I’m sure. I always have a bit of this kind of thing when I’m done with a manuscript.

In the meantime, I’ll just keep reading a bunch and hopefully getting myself back on track in the health department, because I’ve been very, very lax since I began writing-like-crazy on March 7th. April was a terrible month for me in terms of exercise and eating well and all the rest. I definitely need to do better, and not let my messed up ankle and the awful heat that’s already descended on us and my anxiety triggers and my poor coping mechanisms keep me paralyzed.

Agender empty-nester filling my time with cats, books, fitness, and photography. She/they.
View all posts by Amanda →
This entry was posted in Book Talk and tagged Sunday Coffee. Bookmark the permalink.

2 Responses to Sunday Coffee – All the Books