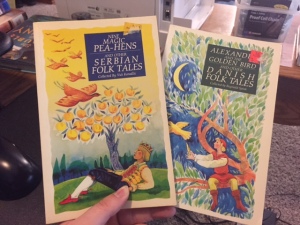 During the Readathon, I read two collections of folk tales. The first, Nine Magic Pea-Hens, is a collection of 35 Serbian folk tales collected by Vuk Karadzic. The second, Alexander and the Golden Bird, is a set of 19 Danish Folk Tales collected by Reginald Spink. Both are short – just over 100 pages each – and some “stories” are a mere paragraph or two long.

Normally I don’t read story collections quickly, because each story feels like an individual tale, and when I read too many in a row, I get a bit exhausted and muddled. However, these were folk tales rather than stories, with no characterization at all. These are old, tales told to teach lessons to children. Some were recognizable as related to fairy tales I grew up with, like Cinderella. Many of them were circular in nature, and some felt like there were pieces missing. (One Serbian tale, actually, had a note on it explaining that a piece was missing.) They were parables and jokes, and at one point, I had the oddest sense while reading, because some of the phrasing and general bizarre nature of the stories reminded me a lot of Kafka’s short stories (especially the short-shorts). They ended up being perfect for Readathon, breaking up some of the longer reads, and I’m glad I stumbled across both books at the recent book sale I went to!

Note: Translated from the Serbian and Danish, respectively.