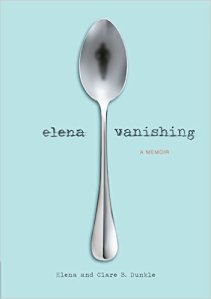 Elena Dunkle developed anorexia as a teenager. This memoir, written with the help of her mother, Clare Dunkle, discusses her struggles with the disorder and her attempts to recover from it.

Recovery is a path, not a destination.

I haven’t had a lot of personal experience with anorexia. The only time I’ve ever been faced with it head on was in early college. There was a girl in my psychology classes who was very thin, so thin that her veins stood out distinctly on her thighs. I didn’t automatically assume she was anorexic, though. I grew up with extremely thin siblings, and that kind of thin was fairly normal for me. Other people whispered about it, but I didn’t. Then I saw her again the next semester, maybe six months after I’d last seen her. I was walking behind her on the way to the food court area, and was shocked. Her thighs were no bigger than her knee bones. There was so little muscle on her arms that she literally looked like a walking skeleton, elbow bones being the largest part of her arms. Her cheeks were just as hollow. This is not an exaggeration. I was completely shocked, but had never even spoken to the girl, and even then, I was too afraid to interfere. I didn’t know her. What right did I have to say anything?

I don’t know what happened to her, in the long run. I do know things changed, because I saw her a year later, and she was slightly chubby. I remember being so happy for her, and hoping that whatever had caused her to gain weight (therapy? medication? I had no idea.) would continue to keep her healthy.

Despite my lack of personal experience with anorexia, however, I do have a lot of experience with eating disorders in general. Because of this, it would be difficult to review this book in full, so I’m just going to bullet-review it:

Lastly, I’d like to say that despite my lack of personal experience with anorexia, I found the book informative and helpful. Generally, along my own path to wellness, I try to find different pieces of wisdom from many sources, and one of those is in books. This was a difficult book to read at times, for many reasons, but I felt it was important to continue. The quote I listed above came almost at the end, and it struck me with a pang. So simple, and so obvious, but not obvious, really, for many of us mired in mental illness, hoping for escape, hoping for the end of the road, and terrified that it will never be there. Those words are the ones I will keep most from this book, and the read, difficult as it was, was worth it just for them.

3 Responses to Readathon: Elena Vanishing, by Elena and Clare Dunkle